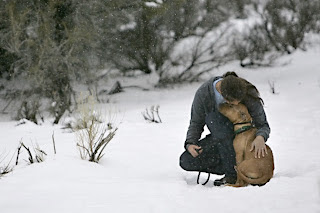 Your favorite dog blogger is a lucky dog because the moms finally had a runner installed on the stairs leading up to our bedroom. This means I no longer have to be carried up and down the stairs all the time. Sometimes I still insist on being carried down the stairs because, well, I had gotten awfully skittish about going down the bare wood stairs with my creaky arthritic legs and I am still not convinced it is 100% safe. I have tried it on my own a couple of times since the carpet was put down and haven't taken any tumbles, so we'll see how it goes. I much prefer the dignity of independent travel, of course, but old dogs really don't like to learn new tricks. Still, I am awfully pleased that the moms were willing to make this accommodation to all the aging bodies in our house. (Moose didn't think it was especially safe for the humans to be carrying a dog down the stairs for potty trips in the middle of the night either.)

Forty seven of the pit bulls seized from the home of former NFL star Michael Vick are even luckier dogs, it seems, for they have been rescued from the brutal conditions in which they were kept and "dispersed to eight rescue organizations for adoption, rehabilitation or lifetime care in sanctuaries," according to a detailed and moving account by Juliet Macur in today's New York Times. Even if you're not a dog person (but if you're not, why are you here?), I defy you not to get a tear in your eye as you read this incredible story of humans working to restore the trust of dogs who have been tortured, trained to fight, and forced to breed. (Make sure you look at the wonderful audio slide show, too.) At the Best Friends Animal Society sanctuary in Kanab, Utah, one dog, Georgia, has had all 42 of her teeth pulled out (by her previous owners, to prevent injuries during forced mating) and barks incessantly at her doghouse. Her caregivers aren't sure why she barks.

“I’m worried most about Georgia,” said the Best Friends veterinarian Dr. Frank McMillan, an expert on the emotional health of animals, who edited the textbook “Mental Health and Well-Being in Animals.” “You don’t have the luxury of asking her, or any of these animals: ‘What happened to you in your past life? How can we stop you from hurting?’

“So here we are left with figuring out how to bring joy to her life,” he said of Georgia, known to lick the face of anyone who comes near. “We want to offset the unpleasant memories that dwell in her brain.”

John Garcia, the assistant dog care manager at Best Friends, marvels at the dogs' ability to recover from their traumas (doubtless thanks in no small part to his patient, compassionate work with them):

“These dogs have been beaten and starved and tortured, and they have every reason not to trust us,” Mr. Garcia said as Georgia crawled onto his lap, melted into him for an afternoon nap and began to snore. “But deep down, they love us and still want to be with us. It is amazing how resilient they are.”

Go on. Get a little verklempt. Go rub the belly of your own untortured companion animal and pause for a moment to reflect on the traumas of your life from which you somehow managed to recover -- with the compassionate support of those you love. Cool, huh?

Then, consider the millions of lucky dog American voters who get to go to the polls on Tuesday to weigh in on the presidential nominating process. Twenty-four states, hundreds of delegates at stake, and polls shifting so fast you could get whiplash trying to read them. In such a fluid state, it's probably best not to make predictions, but the prognosticators here in Roxie's World are feeling feisty and bold, so we're willing to share some of what we've detected from the observation deck looking out over our ridiculously large back yard:
We'll conclude not with a prediction but with an order: Boycott the Super Bowl. Watch Animal Planet's Puppy Bowl IV, starting at 3 p.m. (Eastern) on Sunday instead:

a three-hour extravaganza in which a cast of 46 dogs frolics, chases, pants, sniffs, rolls, tail wags and occasionally picks up a ball (or, more likely, a chew toy) on a set resembling a football field.