The Hermeneutics of Hillary

Today, there is another song on our minds, that classic of obsession recorded by the immortal Ms. Patsy Cline: 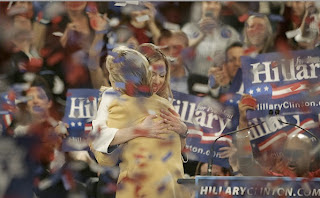 Flat-Out Funniest Bit to Emerge on the Phenomenon of Obsessive Hillary Hatred (from TBogg [musing on another alleged incident of misty-eyedness by Hillary] by way of James Wolcott, who voted for Senator Clinton yesterday in New York):

Clintonalia scholars studying her every gesture will tell you that a smile (accompanied by her harsh and unappealing laugh) means that she is thinking about how much she would like to destroy America. A pensive look means that she is wondering who Bill is fucking at that moment. A raised eyebrow means that she's going to have Vince Foster killed. Again. In fact she has no emotions, no expression, that is without meaning, whether it is to fulfill her insatiable need for power or, in some cases, to hide her secret insatiable need for power. Part of it is Hillary and part of it is the fact that she is a woman (and God knows that dealing with white women can be a problem) and they have mysterious ways of sending us signals.

Clearest Proof Yet that Maureen Dowd Has Simply Lost Her Mind with Hillary Hatred (Or, Proof that, If Elected, Hillary Will Be America's Second Black President:

Darkness seeking darkness. It’s an exhausting specter, and the reason that Tom Daschle, Ted Kennedy, Claire McCaskill and so many other Democrats are dashing for daylight and trying to break away from the pathological Clinton path.

Another Reason to be Grateful that Bloggers Are Keeping a Close Eye on MoDo (from Bob Somerby at The Daily Howler by way of Digby, Ace Detective of Media Sexism):

Maureen Dowd is morally sick—she’s just unwell—about those vexing gender issues. Her sickness has been apparent for years. In that respect, she’s much like the Times’ own Britney Spears; she’s someone who needs intervention. But even worse than her moral sickness is her constant, world-class dumbness. If humans civilization continues to develop, future generations will look back on such work with unease, as we look back on medieval medicine. What might it say about us, they will ask, that our ancestors “reasoned” that way?

Compelling Evidence that There May Be More Than One "Bitch" Involved in This Race:

Moose is bitter about not having come up with that brilliant line about Hillary having Vince Foster killed. Again. But there is joy in Roxie's World over the Super Tuesday results, beloveds. The pundits are eating crow again. The Democrats are pretty, however deadlocked, and the Republicans are savagely going at one another. Dems are voting in droves all over this gloriously messed up land, and finally, next Tuesday, the Moms will get to vote in what Mark Shields just dubbed the Crabcake Primary (MD, VA, DC). Hold on to your hats, America -- The Girls are voting for the Girl!
Posted by Roxie Smith Lindemann at 8:36 PM