On Losing Our Mittens 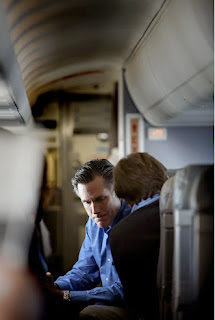 There is sadness in Roxie's World today, children, as we mourn the loss of Mitt Romney from the field of presidential contenders. The faithful among you will recall that back in July we proposed organizing a group called Democrats for Romney because we thought it would be so much fun to run against the good-haired replicant from Massachusetts. (By the way, has anyone noticed what a tough political season it's been for guys with good hair? Edwards didn't win a single primary, and the poor Mitster mostly took the Mormon states and states he or his father had governed. Meanwhile, dudes with little to no hair are still in the running. Go figure.)

We will miss Mitt. I can't say why, really, since we haven't watched a single Republican debate and realize that the Democrats would have been squeamish about exploiting anti-Mormon bigotry as a way of peeling votes away from Republicans in the fall election, even though Mitt's clicky eyes offer fairly compelling evidence that Mormonism actually is a cult. We will miss the calm efficiency with which he disposed of millions upon millions of dollars in the misguided belief that America was eager to embrace a candidate who had to explain that one wife was plenty, really. We will miss the pandering and the brutal attacks on McCain and the faked outrage at reporters. We will miss having a Mormon story almost as entertaining as HBO's Big Love to follow while our favorite show is between seasons.

Sigh. Mitt, we hardly knew ya. Seriously, fella -- Who the hell are you?

In any case, did y'all happen to notice how spot-on our Super Tuesday predictions were? Seriously, kids -- The prognosticators of Roxie's World beat the Zogby pollsters right into the dirt! We predicted Clinton and Obama would each win their home states, and they did, to the surprise of no one on earth. More impressively, we predicted Obama would take both Georgia and Alabama, and he did, though Real Clear Politics showed a slim lead for Clinton in Alabama ahead of the vote. In the clearest sign that our crystal balls are working pretty darn well, we predicted that Clinton would take California by at least 8 points and that Hispanic voters would, unlike Ted Kennedy, stick with her. She won by 9.6% and got close to 70% of the Hispanic vote. We also predicted that Mittens would quit the race, but anyone could have seen that coming. On the whole, though, we're mighty impressed with our skill at tea-leaf reading. We're hoping that Butch Goddess Rachel Maddow might notice and consider making us a regular feature on her radio show. C'mon, Rachel -- Every show needs a novelty act, and your dyke listeners will love the dog angle. We await your call!

From the crystal ball to the radar screen: We're starting to see some good take-a-breath coverage of Obama, particularly on the cult-of-personality issue. Jake Tapper has a nice piece called "And Obama Wept" (with links to several other similar bits) that suggests a certain queasiness with the messianic tone that has crept into the language of Obama's supporters and of the candidate himself. We won't put in a link to the already infamous "Yes We Can" video, but if you haven't seen it you should. It's the weirdest mixture of politics, entertainment, Starbuck's-style branding, and non-denominational evangelical religiosity we've seen in a long time. And I'm sorry, folks, but it is really hard to imagine the object of so much awe-struck reverence sullying the hems of his garments by engaging in the hard and often dirty work of governance.

Finally, we don't even remember how we stumbled upon this, but here's a thoughtful piece by Melissa McEwan on why some women might be reluctant to come out too strongly or too publicly in support of Clinton. "A lot of women who support Hillary see the depth and scope of the organized institutional misogyny being levied against her and feel, somewhere in their guts, that a massive 'women for Hillary' movement would actually be used against her and undermine her campaign," McEwan speculates. The moms think McEwan may be onto something. They have been noticing lately that women tend to talk about Clinton in whispers and asides, the way they used to talk about hot flashes and other supposedly shameful aspects of their femaleness. Goose thinks this is one reason Obama has done well in caucuses -- because women may be reluctant to stand up publicly and show their support.

Golly, kids, whatever happened to that whole hear me roar thing? Ain't it about time we stood up and shouted for the sister? Assuming, of course, we're not already down on our knees for the brother? I'm just sayin'.
Posted by Roxie Smith Lindemann at 12:24 PM