My typist has a cold, and a deep laziness has settled over Roxie's World here in the middle weekend of February. We haven't yet come up with the magic formula that is going to save Hillary Clinton's presidential campaign and rid the world of sexism and dangerously vapid media coverage. We are so astonished by Tweety's confession this week that hearing a speech by Barack Obama sends "this thrill going up my leg" and by MoDo's assertion, with no apparent trace of irony or self-consciousness, that "attacks against powerful women can be harsh and personal and unfair, enough to make anyone cry" that we are tempted to cover our head with our paws and declare Roxie's World a media-free zone. But we couldn't do that to you, our legions of loyal fans, who are out there, patiently waiting for a weekend treat from your favorite dog blogger. Here are a few morsels from the goody bag, mostly things passed along by devoted members of the pack.

Did Roxie's World neglect to wish you a happy Valentine's Day? By dog, I think we did! Here's a little Valentine greeting passed along by the moms' high-powered enviro-politico pal (who was last seen in Roxie's World wielding an ax for Hillary Clinton): 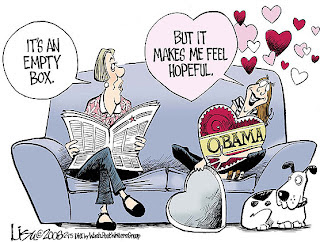 And here's something Moose stumbled on halfway through her first cup of coffee this morning: 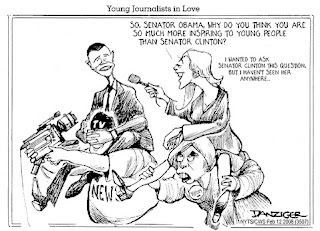 And here's a cartoon that was much funnier when it was published in early January, before we started worrying that John McCain might actually be electable (with thanks to an exceptionally devoted reader who doesn't yet have a blog-name, though we are considering several that involve witty allusions to cats, England, New Jersey, and the racial politics of the Victorian period): 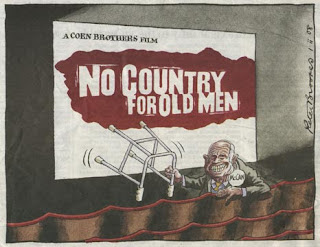 Speaking of cats, if two Maureen Dowd columns a week is not enough to line the floor of your litter box, check out the amazing Dowd-O-Tron from 23/6. You can make your own MoDo column any day of the week with just a few clicks of the button! (Caution: Studies show that spending too much time in the mind of MoDo may be hazardous to one's health, causing toxic levels of thoughtless causticity and uncontrollable bouts of pointless antiphonal word-play.) (With thanks to deputy internets troller Dudley the Beagle, who sniffed this out before his nose got so high in the air from Uno's win at Westminster that he stopped returning our calls.)

Eager for the absolute latest on the Obama Messiah Watch? You'll find it here at Is Barack Obama the Messiah? It's supposed to be a parody, but we're wondering if it might not have the opposite effect. Still, we'd be happy if one of our devoted fans were to call our snarky references to Jesus Christ Superstar in Wednesday's post to their attention. We wouldn't mind ending up in the list of "Heretics and Unbelievers" in their sidebar.

Finally, June Star phoned in from the Garden State Parkway the other day with word that Jon Stewart made a reference to the War on Terriers in a piece he did on the triumph of Uno the beagle at Westminster. It's short, funny, and related to the long-awaited end of the writer's strike in Hollywood. Follow the link; the video wasn't loading completely when we had it embedded here, so we took it down.

That's it, kids. We promise more original material when Moose and her head are on speaking terms again. Love you. Mean it.
Posted by Roxie Smith Lindemann at 8:05 PM