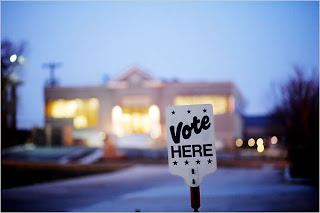 Sorry to be so late with our Super Tuesday post, kids. I know you've been on pins and needles waiting for me to weigh in. "How is Roxie feeling?" you were wondering between games of solitaire in your lonely cubicle. "Does she really think Hispanics will stick with Hillary in California?" "Is Huckabee's win in West Virginia making her feel confident about her VP prediction on the Republican side?" "And is Moose thinking that her pick for Oscar-winning best song, 'Falling Slowly' from Once, offers a great refrain to hum on this extraordinary day in American political history?" You remember the chorus, not to mention that melody line that got lodged in your brain for three days after you saw the flick. Go on -- Hum along:

The truth is, kids, we're tired and cranky and have no idea what's going to happen tonight. We give you permission to watch TV or click over to the big-dog blogs that are liveblogging the results that will be trickling in all night long. Tweety is already warming his big seat on MSNBC, so if you tune in there make sure your cattle gun is close at hand. We like what we're hearing so far about national exit polls of Hispanic voters (breaking 61% to 38% for Clinton over Obama), but we've been freaking out over what has felt like a shift in momentum toward Obama in the last several days.

So, settle in on the couch. Pour a drink. Or three. Take a breath. Or two. Because we love you, here are some links we would have sent you over the past couple of days if my typist hadn't been preoccupied by her day job. (You do realize that the spring semester has started, right? And you do remember that she did what she has taken to calling her "blog talk" again today at Maryland, right?) Put these links in your Backlash Against the Backlash Against Hillary Clinton File:
Okay, keep that one out of my holiday stocking. One more link, this one not quite for the Backlash file, but Paul Krugman had another smart, measured comparison of Clinton and Obama on health care again yesterday. Read it and tell me again why this fella has progressives swooning.

A final note for all you girl-watchers: Rachel Maddow, official Butch Goddess of Roxie's World is on MSNBC tonight. Maybe she packs a cattle gun and can take care of Tweety if he gets out of control. After all, she's the one credited with unleashing the blog swarm that resulted in Tweety's red-faced apology for the way he talked about Senator Clinton after New Hampshire. Whatev. We just think she's. . .an incredibly articulate political analyst.
Posted by Roxie Smith Lindemann at 7:53 PM