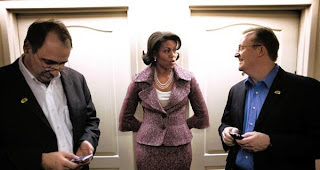 For the Clintonistas of Roxie's World:

So you're sitting out there, poring over the polls and primary maps, trying to master the impenetrable arcana of superdelegates, wondering if Howard Dean will ever figure out what to do about the debacles of Michigan and Florida, and perhaps you're edging your way toward the third stage of your grief over what feels like the implosion of the Clinton campaign: bargaining. Perhaps you've started to think, Maybe it won't be so bad if Obama is the nominee. He comes with so much less baggage than the Clintons do. Maybe fear of being called racist will take some of the edge off the Republican attack machine. Maybe it will be a kinder, gentler campaign that actually focuses on the issues. Maybe Obama's soaring rhetoric, personal magnetism, and stunningly beautiful family will neutralize and triumph over all the poisonous waste Republicans have dumped into our political discourse in the last twenty years.

Regular readers know we generally avoid the blogger's condition we like to call Digbyitis, in which the blogger fills huge expanses of prime blog un-real estate by cutting and pasting lengthy excerpts from other blogs, columns, or news reports. Much as we revere Digby (and we do), we kind of think that's cheating, and we know June Star agrees with us and we like to stay in June Star's good graces. Anyway, we're going to make an exception to our rule by printing an entire post by John Podhoretz that was published yesterday in "Contentions," a Commentary magazine blog, because we want to make sure even our non-linky-loving readers see it. Think of it as a preview of the scary movie we might all have to sit through in the fall if Obama is the nominee and his lovely but occasionally loose-lipped wife Michelle is the first-lady-in-waiting.

Michelle Obama today said that “for the first time in my adult lifetime, I am really proud of my country. And not just because Barack has done well, but because I think people are hungry for change. I have been desperate to see our country moving in that direction.”

Really proud of her country for the first time? Michelle Obama is 44 years old. She has been an adult since 1982. Can it really be there has not been a moment during that time when she felt proud of her country? Forget matters like the victory in the Cold War; how about only things that have made liberals proud — all the accomplishments of inclusion? How about the passage of the Civil Rights Act of 1991? Or Ruth Bader Ginsburg’s elevation to the Supreme Court? Or Carol Moseley Braun’s election to the Senate in 1998? How about the merely humanitarian, like this country’s startling generosity to the victims of the tsunami? I’m sure commenters can think of hundreds more landmarks of this sort. Didn’t she even get a twinge from, say, the Olympics?

Mrs. Obama was speaking at a campaign rally, so it is easy to assume she was merely indulging in hyperbole. Even so, it is very revealing.

It suggests, first, that the pseudo-messianic nature of the Obama candidacy is very much a part of the way the Obamas themselves are feeling about it these days. If they don’t get a hold of themselves, the family vanity is going to swell up to the size of Phileas Fogg’s hot-air balloon and send the two of them soaring to heights of self-congratulatory solipsism that we’ve never seen before.

Second, it suggests the Obama campaign really does have its roots in New Class leftism, according to which patriotism is not only the last refuge of a scoundrel, but the first refuge as well — that America is not fundamentally good but flawed, but rather fundamentally flawed and only occasionally good. There’s something for John McCain to work with here.

And third, that Michelle Obama — from the middle-class South Shore neighborhood of Chicago, Princeton 85, Harvard Law 88, associate at Sidley and Austin, and eventually a high-ranking official at the University of Chicago — may not be proud of her country, but her life, like her husband’s, gives me every reason to be even prouder of the United States.

Way to go, Michelle. You see how easy it is to toss a big fat softball straight at the waiting bats of the right-wing commentariat? One little off-the-cuff remark and the terrifying specter of the America-hating left is conveniently revived. Give 'em an inch, and next thing you know 44% of voters (and 92% of Fox news viewers) will believe that your husband, Barack HUSSEIN Obama, helped plan the 9/11 attacks. Give 'em another inch and little old ladies from Texas will swear that you killed a man and personally wrapped his body in a rug. (This non-urban legend [with Hillary Clinton in the role of diabolical left-wing killer] was recently circulating in Goose's family in Texas. Apparently, they're not all yellow-dog Dems. Don't you [or "chu," as they say in the Lone Star state] just love it when relatives come to visit?)

John McCain's scary wife Cindy quickly pounced on Mrs. Obama's words, introducing her husband to a Wisconsin audience by remarking, “I’m proud of my country. I don’t know about you – if you heard those words earlier – I’m very proud of my country.’’ NY Times political blog has links to a lot of other reaction here.

Let us be clear: Roxie's World deplores the fact that American politics has been reduced to gotcha games and swift boats and common denominators so low you need a bulldozer to dig down to see them. But do not for one second kid yourselves that the man David Brooks today deemed "His Hopeness" will deliver us from this cesspool to a utopia of post-partisan, post-race, beyond-gender cooperation. (I guess that means there'll be no free tampons in the Obama era, huh? Moose was really hoping that the first woman president would place buckets of free tampons on every street corner. And condoms. And maybe dental floss -- all kinds of sensible things you might not have on you when you need them. Women are really good at thinking about stuff like that. Maybe we should have thought of that before we decided gender doesn't matter, which is the obvious corollary of Obama's supporters declaring that race doesn't matter, isn't it?) (Go read the rest of that David Brooks column, by the way. His analysis of "Obama Comedown Syndrome" is actually, surprisingly, funny, though it also affirms our sense that Obama-mania may be short-lived, followed by a nasty hangover, and lead to President John McCain deciding to stay in Iraq for ten thousand years. And we do intend to hold all our friends who voted against Hillary for authorizing military action in Iraq accountable for that.)

Also, go read the long Newsweek profile on Michelle Obama. We've decided we can't stand her, but we're pretty sure that's just bitterness on our part. And, oh yeah, maybe that thing she said back in May about not "identifying" with feminism -- or progressivism -- because she's "not that into labels." Oh, yeah, us neither, Michelle, but we are into a crazy little thing called convictions. Got any?

This was going to be a much better post, kids, but we had some weird technical difficulties around embedding links that had my typist ready to throw her laptop straight off the observation deck and out into our ridiculously large backyard. Love you, have our doubts about technology.

Oh, yeah, and Clinton lost Wisconsin, but you probably already knew that. LA Times asks if it's "the beginning of the end for Clinton." And maybe you're asking that, too.
Posted by Roxie Smith Lindemann at 11:07 PM