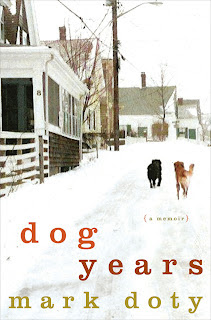 The moms tell a story about the day they adopted me. It was May 22, 1994. They had been together for ten years and had never had a dog before, but they had just bought their first house, which came with a ridiculously large back yard. Moose looked out at that long, empty, unkempt space one day and declared that they needed a dog, as if it were some sort of yard ornament. Some yards have water features; theirs apparently required a creature feature, and so a search was launched for the right breed and the perfect name. Goose had a wire-haired fox terrier when she was growing up. She recalled it as a fun and noble beast who brightened up her Texas girlhood with charming antics like visiting her grandmother every morning to get a mint. Moose came up with the name Roxie because she had a grandmother named Roxie who always went by her middle name, Irene, which Moose thought was a shame because Roxie is ever so much cuter-sounding than Irene, which has to be the fustiest-sounding name in the world.

Their search concluded, they drove to Andrews Air Force Base on a bright May morning just to look, they insisted, at a litter of wire-hairs that had been born on April 1. When they knocked on the door, the runt of the litter came racing around a corner and leapt into Goose's arms. In contrast to her six siblings, the runt was mostly white, except for some black and brindle on the head and a large black spot on her right hindquarter. The energetic runt was, of course, ME, and I greeted Goose with a thousand tiny kisses. In a moment, the die was cast. Goose and I had claimed one another, and it was just a matter of waiting until the more deliberate Moose had carefully observed and examined all seven puppies in order to determine that, yes, the gregarious little runt was indeed the best and Roxie-est of them all. After watching me run my parents and litter mates around the yard for an hour or so, she finally figured out what Goose and I had known all along, and off we went to live happily ever after.

I tell this story because Mark Doty describes a similar moment of instantaneous dog-human bonding in his wonderful new book, Dog Years: A Memoir, which you can and should buy here. Doty describes a moment in Mexico, traveling with his partner Paul. They have lost one dog to a devastating neurological illness and are concerned about the health of another they have left at home when Doty finds himself suddenly smitten with a dog he meets wandering the streets of San Miguel. He can't stop thinking about the dog and seriously considers taking it back to New York. Reflecting upon the intensity of his yearning for this stranger, Doty recalls the moment of their connection, when he held her head in his hands and each looked deeply into the eyes of the other as they took one another's measure. "I trust that moment," Doty writes,

the weight of her small head in both my hands; who she is, in that instant, became perfectly clear. You can know an animal -- or a person, for that matter -- in an instant, though your understanding can go on unfolding for years.

Dog Years is full of such epiphanies, moments of deep connection between dogs and humans that illuminate or console, reveal and re-vitalize. Doty is an accomplished poet and memoirist, and the elegy is one of his favorite modes. (A previous memoir, Heaven's Coast, focused on the illness and death of an earlier partner, Wally Roberts. For more complete information on Doty's career, click here.) This eloquent and moving book will appeal to a range of readers on a number of different levels. Dogs will admire Doty's close attention to the physical particularities of the two dogs who are the focus of his story -- the spots on Beau's tongue, the smell -- like corn muffins -- of Arden's ears, the golden coat of the one, the shiny black of the other. They'll thrill at the time he takes recounting the many pleasures and adventures of his life with the dogs and be moved by the depth of his caring for them through the infirmities of old age and the profound sorrow he experiences at their passing. People who love dogs will be happy to see the subject of loving dogs taken so seriously. Moose appreciated the swift, direct manner in which Doty addresses many of the charges typically leveled against writers who take up the subject of love for the companion species -- i.e., that it is inherently trivial and sentimental. Writing in the shadow of September 11, 2001 (and having been in New York City on that fateful day), Doty acknowledges that the death of a dog is not commensurate with the death of thousands of people, yet he insists that Beau and Arden are as deserving of love and grief as the human dead:

. . .the plain truth is no one should have to defend what he loves. If I decide to become one of those dotty old people who live alone with six beagles, who on earth is harmed by the extremity of my affections? There is little enough devotion in the world that we should be glad for it in whatever form it appears, and never mock it, or underestimate its depths.

Love, I think, is a gateway to the world, not an escape from it.

In passages such as this, Moose says, one detects the queer resonances of Doty's story. There is, she thinks, a renegade quality to the fierceness of Doty's love for dogs. He makes large claims for the psychic and existential significance of such love and dismisses those who would mock or trivialize it as lacking in courage or compassion. For all the sentimentality surrounding dogs, Doty implies that genuine love for them is treated as treacherous or embarrassing, as are many forms of unconventional love. In honoring Beau and Arden, Doty honors love in all its forms as a means of soul-touching and world-building. The domestic life conjured in Dog Years may seem comfy, middle-aged, and academic -- the epitome of what is sometimes derisively referred to as "homonormativity" these days -- yet the deep-seated commitment to love's power to transform gives the book a queer edge, a sense of unrealized utopian possibilities.

People who love books will also love the literariness of Dog Years. Emily Dickinson serves as something of a touchstone, the point to which Doty returns again and again in probing the nature of love and the certainty of loss, the paradoxes and contradictions involved in human reckonings with mortality, contingency, "the empty space of our own death." From Dickinson, Doty learns both rage and resilience. He mourns each individual loss in its minute particularity and still finds within himself the will and the energy to form new attachments. In that passionate embrace of contradiction, Doty finds his way out of despair and into an affirmation "of futurity and of hope." The affirmation is no banal, "life goes on." It is a complex recognition that one feeling does not cancel out another. Sadness and joy may be two humps on the same camel -- or, more to the point, two spots on the same dog. Life does go on, until it doesn't.

When Moose came upstairs last night after finishing Dog Years, she had tears in her eyes. She came to the bed and put her face down next to mine, nuzzled me gently. I knew she was sad because the book made her think of her own dog's years and how few there might be left. She's noticed recently that my hearing is not what it used to be. She's put me on low-dosage aspirin to relieve the aches in my joints, but I'm still not up for the long walks we used to take. She misses me out on the trail and seeks the solace of loud music to make up for my absence. She nuzzles me again. I lay my head back down on the bed.

Silly Moose, I wished I could say, don't start missing me yet. I'm still here.