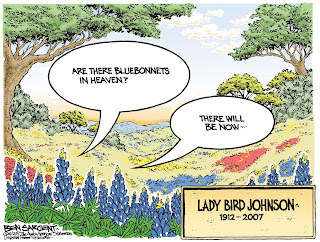 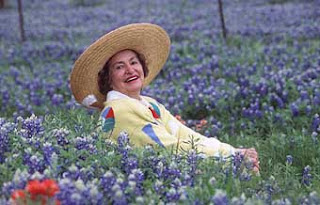 Today's post is in memory of Lady Bird Johnson, who died yesterday at her home in Austin, Texas at the ripe old age of 94. Following the deaths within the past year of Ann Richards and Molly Ivins, there is some concern that the world's supply of feisty old Texas women may be approaching dangerously low levels, but the moms can attest from their recent trip to the Lone Star state that this glorious species faces no threat of extinction. Their proof? Goose's very own mother, who is 87 and suffers, as Lady Bird did, from macular degeneration, brought her best pal Miriam with her to my Uncle Bobby's gig at the Broken Spoke, and they rocked out until 12:30 in the morning. Dog bless Texas women, I say. Paws up for the good old girls!

(For Roxie's World's tributes to Ann Richards and Molly Ivins, click on their names.)
Roxie's World offers a personal tribute to Mrs. Johnson by passing along one of our very favorite stories from Goose's Texas girlhood. Some of you have heard it, but I know you won't mind hearing it again. It is, I promise, a true story and not a Texas tall tale, though you might be tempted to suppose it contains a stretcher or two. Moose used to think that about a lot of Goose's Texas stories, but after twenty-three years she has come to recognize that, in Texas, "larger than life" is often just the scale of life itself.

Goose says this incident must have happened in about 1965. She was 11 or 12, and LBJ had won his own term in the White House in a landslide in 1964. Her parents were yellow-dog Democrats in the west Texas town of San Angelo, where her father was a prominent attorney, so when Lady Bird came to town for a luncheon of women Democrats, Goose's mother was invited to attend. Goose desperately wanted to go along, but her mother resisted the idea. Years earlier, she had already gotten into a nasty battle with the gender fascists on Romper Room over whether her youngest child should be allowed to appear on the show wearing her PF Flyers rather than the Mary Janes all the other girls were wearing. She had fought -- and won -- the battle for her daughter's right to comfortable footwear (see photo below; Goose is on the far right), but she wasn't sure her irrepressible red-headed tomboy could be counted on to behave at a proper ladies' luncheon. Goose's father entered the fray in support of her cause, arguing they couldn't deny the child the opportunity to meet the First Lady of the United States, especially a First Lady from Texas! (The Texas card wins every time in Goose's family.) Her mother reluctantly agreed that Goose could come, but only on two conditions: 1) that she would be quiet and 2) that she would eat everything -- everything -- on her plate. Goose instantly agreed to both conditions. She has never been a picky eater, and she figured she could keep quiet for an hour or so, somehow.

The day of the luncheon arrived. Goose was dressed in her Sunday best, including her Mary Janes, and was determined to be on her best behavior. She was seated across the table from her mother. Lady Bird was on the same side of the table as her mother and a couple of places down. At first everything went beautifully. Goose stayed quiet by eating bread and butter and closely observing the women at the table, trying to catch the drift of their conversations about family, politics, men, the war. She was starting to feel like quite the little lady, when suddenly a salad plate appeared on the table before her. Goose, as I said, is not a picky eater, and she has always been good about eating her vegetables. Her mother's family survived the Depression by selling produce, so children were never allowed to turn up their noses at vegetables. When Goose looked down at this salad, however, she saw to her horror that it was covered with one of the all-time ickiest, most disgusting, foul-smelling, and as far as she was concerned inedible things on earth: ANCHOVIES! Goose shot a panic-stricken look in her mother's direction. "Mom!" she whispered, trying to sound both polite and urgent. "Mom," she repeated. "There are anchovies on this salad!" Her mother, engrossed in conversation, ignored her entreaties. Goose, growing increasingly concerned that she would not be able to satisfy condition #2 without becoming physically ill, started kicking her mother under the table and continued to call attention to the small stinky fish on top of her salad. She now admits it is possible her voice rose above the level of a whisper, but her mother continued to ignore her.

Suddenly, just as she thought she would explode from the pressure of trying to be good, Goose felt a hand on her shoulder. She looked up, and there stood Lady Bird, gazing down at her like some great Texas goddess of wisdom. "Darlin'," she said in a voice that was equal parts sugar and steel, "don't you like anchovies?" "No, ma'am, I don't," said Goose. "I promised Mama I'd eat everything on my plate, but I can't stand anchovies. They stink." "Well, don't you worry, darlin'," she cooed. "I love anchovies," and with that she reached down, plucked the offending fish off Goose's plate, popped it into her mouth, and walked away with a smile. Goose's mother glared at her from across the table, but her eyes softened as Goose picked up her fork and ate her salad like the good little girl she was determined to be. The rest of the luncheon went off without a hitch, and Lady Bird Johnson had earned a fan for life.

Peace be with you, Lady Bird. Wherever you go, may there always be bluebonnets and long stretches of billboard-free highways. And anchovies if you really, really want them. 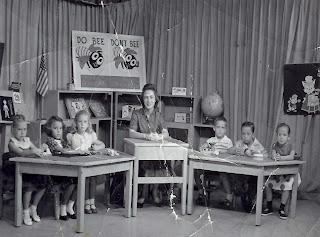 Posted by Roxie Smith Lindemann at 10:20 AM