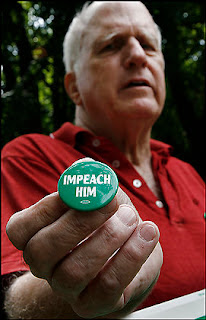 Roxie's World vigorously protests the arrest this weekend of 74-year old Alan McConnell on charges of trespassing for selling "Impeach Him" pins at a farmer's market in Kensington, Maryland. Moose bumped into this fine gentleman, a retired mathematician, last weekend at our own Takoma Park Farmer's Market and eagerly purchased six of the simple yet elegant buttons from him for a mere $5. She found him to be a delightful addition to the vendors of produce, cheese, meats, baked goods, and flowers who line both sides of Laurel Avenue every Sunday from 10 a.m. to 2 p.m. here in our happy little neighborhood. He was in no way disruptive to the sale of goods or the flow of traffic and did not seem in the least "aggressive" in his sales tactics, as some at the Kensington market have alleged.

Here is the Wa Po story on McConnell's arrest. And here is a piece that ran the day before giving some of the background on the issue, in which McConnell offers this spirited comment on his imminent arrest:

"I think it would be a good show," he said. "I am hopeful it will be a good show. . . . To have an old, old, old fart like me dragged off, with people in the background holding signs, that's an opportunity. That's public relations."

Roxie's World gives a hearty paws up to "old, old, old fart[s]" who are still putting themselves on the line for their beliefs. And Moose cordially invites the good people of Kensington to drive on over to Takoma Park, where you can get your fresh herbs and your free speech, too.