This will be brief, as it's past 10:30 p.m. in Japan, and our bodies are still trying to find their way in time. My computer tells me it's 9:35 a.m. at home, yet Goose and I just finished a lovely dinner here in the hotel. We were both wide awake at 5 this morning, but I think tonight we'll have a normal night's sleep and be more or less on local time tomorrow.

As I noted earlier today in Comments, our trip here was a smooth one. We were both exhausted before we ever got off the ground, so I can't say that I spent the 14 hours on the plane in a particularly productive way. I spent a shocking amount of time pondering the (to me) baffling fact that we traveled thousands of miles west, and it kept getting earlier and earlier and earlier (and it also never got dark), until we crossed a magical line on the planet and discovered it was already tomorrow. At one point, Rox, Goose looked over, and I was making a big globe in the air and dividing it up with vertical lines. . . .Oh, you know how literal I can be, Rox. Anyway, somehow, it is later here, though in California it is earlier. Go figure.

I have to admit we were intimidated this morning about going out to try to conquer this vast city. We had great advice from Luanne's friend Laura over our long breakfast and a detailed session with the hotel concierge, but when we hit the streets on our own it was still challenging to find our way through the maze of streets and the subway system without knowing the language or even the alphabet, though there are English signs here and there, especially in the subway. Ultimately, though, I'm proud to report that we managed to pick up train passes and find our way to Asakusa, site of a Buddhist temple built in 1649, the oldest temple in the city. It's a beautiful place, and it was fascinating to realize that the hordes of "tourists" there clearly saw it as a shrine and treated it with genuine respect (as opposed to the mostly fake respect we're accustomed to seeing in, say, European cathedrals). People paused to pray before statues of the Buddha, covered themselves in smoke from incense, washed themselves in water from fountains. It was a peaceful place, despite the crowds. 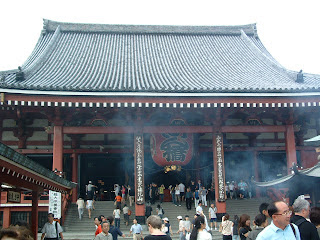 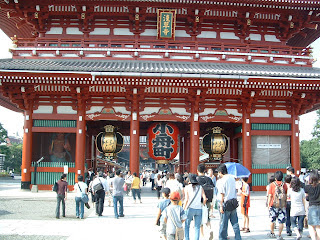 From Asakusa, we went to a "shrine" of another sort, the upscale shopping district of Ginza. There was comfort in being in a place that had the familiarity of places like Fifth Avenue after the overwhelming strangeness of much of the day. The avenues in Ginza are broad, and many of the brand names are familiar, though the most amazing thing we saw was the "food garden" in the basement of the Mistukoshi department store. People had told us this was something we had to experience, and they were right. I've never seen such an astonishing array of delectable looking food. We bought some dumplings and sushi and then wrestled with the difficult question of where to eat. Goose was convinced that plopping down and eating in some random public place would constitute a major breach of local etiquette. I was starving and insisted that we sit down and eat the food we had bought and paid for. "Look, anyone who sees us knows we're Americans. They already think we're barbarians. Sometimes nationalistic stereotypes can be very convenient. Sit down. Eat." And so we did, though the normally "rules-are-for-little-people" Goose was dying from embarrassment the whole time. What can I say? We're in another world. The rules and the roles get a little screwy, though, fortunately, Goose can still get us home, no matter how challenging it is to navigate.

'Night, Rox. 'Night, LLF. We're closing in on midnight in Tokyo, which means it's darn near the day after tomorrow, and I'm afraid I can't handle a conundrum of that scale. Tomorrow afternoon, we head to Kyoto to hook up with the Dickinson folk. More from there. 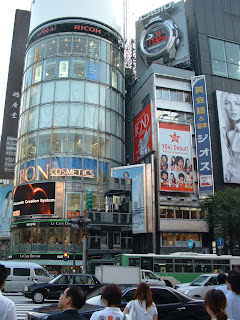