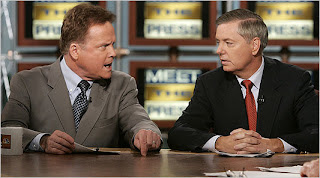 It's been non-stop fun here in Roxie's World this weekend, kids -- long summer evenings of re-connecting with old dog pals, of showing a new dog pal around my ridiculously large back yard, of listening to the moms and their human pals carry on about the state of the world, their lives, their fragile hearts, their conflicted minds. Your favorite dog blogger is one tired old pup this evening, though, so if it's all right with you I'm just going to toss up a few links and head off to bed. Once the batteries have been re-charged, I'll sit down with the creative team and the political division and draw up a plan for a series of posts guaranteed to get all of us through the dog daze of summer. Feel free to leave suggestions in Comments. You all got As for excellent participation in the Cutest Non-Lady Tennis Player Contest last week, so by all means keep those opinions comin'. Your input is important to us.

[Obama] would have to decide he would be willing to coexist with a strong woman. But it seems as though he already does that at home. You would have to be willing to let a charismatic man steal some of your thunder, but you do that at home, too. This would be a political marriage of convenience, sure, but one that could excite the country. The president has driven the nation into a ditch, and the American people are standing by the side of the road with their thumbs out. Everyone is poised for big change, big ideas. Do the big thing that also happens to be the right thing. Your Web site says help make history. Go ahead. I dare you.

The rest of the article is here.

Golly, kids, doesn't it feel to you that the Bush years have been just about the longest, scariest Prick Flick you've ever seen? Yeah, me, too. Wake me when it's over, will you?
Posted by Roxie Smith Lindemann at 9:04 PM