Have you ever noticed that when you start noticing something you suddenly notice it everywhere? For example, words beginning with "M." Lately, Moose and I have noticed, from the observation deck that looks out over the broad expanse of Roxie's World, that words beginning with the thirteenth letter of the alphabet are popping up like weeds. (Of course, we also notice a fair number of actual weeds when we're out on the observation deck, which overlooks our ridiculously large back yard, but for the moment let's focus on the metaphorical weeds rather than the literal ones, okay?) Lest you think we're just an old dog obsessed with a new scent or an English prof determined to find patterns in everything, consider the following examples:

Marathon: The Democratic majority in the Senate held an all-night session last night in an effort to break the Republican filibuster on a bill to begin withdrawing U.S. troops from Iraq. Mattresses were brought in so that senators could curl up to plan their big speeches about their deep misgivings toward the increasingly fuzzy mission of the troops in Iraq. Wa Po described the session as a marathon, while Republicans did their best to dismiss it as a "stunt." Roxie's World gives it a hearty paws up for keeping the war front and center on the American political stage. Even if it was a "stunt," it beats hell out of the stunts Republicans pulled when they controlled the Congress. (Can you say, "Terry Schiavo?") Think Progress was live-blogging from the Senate session and has some good bits up here. Crooks and Liars has vid of Senator Mary Landrieu's speech here.

Menstruation: Are you surprised that the Geniuses of Western Civilization have figured out how to stop menstruation before they figured out how to end the war in Iraq? Is it just me, or does that reflect a certain misdirection of energy, a flawed arrangement of priorities? Or does it merely prove that the Geniuses of Big Pharma have an easier job to do than the poor suckers stuck playing war games in the bowels of the Pentagon? Or that Prick Science is ahead of Prick Militarism, to return to the pointed theme introduced by Sister Gloria Steinem in the piece we referred to in Sunday's post? We offer these rhetorical questions in response to Karen Houppert's Op-Ed in yesterday's NY Times regarding the FDA's recent approval of a new birth control pill, Lybrel, that causes cessation of periods. We'd heard about Lybrel before, but Houppert, who wrote a book called The Curse: Confronting the Last Unmentionable Taboo, Menstruation, offers a trenchant analysis that tracks shifting attitudes toward menstruation alongside anxieties about women's expanding roles and raises good questions about the medicalization of normal bodily functions and stages of life. (This is one of those subjects that really sets Moose off, so we'd best be careful. She is not by nature a conspiracy theorist, but she sincerely believes that pharmaceutical companies have been paying research scientists to invent new diseases in order to expand the market for new drugs. Restless Leg Syndrome? Check. Social Anxiety Disorder? Check. Premenstrual Dysphoric Disorder? Moose puts a check on this one, though she fully acknowledges the painful realities of PMS, having lived with it for years.)

Marriage/Madam/"Monogamy": We have a torrent of M words released in the hilarious story of Louisiana Senator David Vitter, a family-values conservative whose phone number turned up in the logs of the so-called "DC Madam," Deborah Jeane Palfrey. We won't cruelly mock Vitter's poor wife Wendy for her stand-by-your-man routine, despite the fact that she herself was cruel and arrogant enough to say during the Lewinsky mess that "I'm a lot more like Lorena Bobbitt than Hillary [Clinton]. If he does something like that, I'm walking away with one thing, and it's not alimony, trust me." We won't even make fun of her questionable fashion judgment in choosing to appear before the cameras for the traditional damage-control press conference in a form-fitting, low-cut dress that, from a distance, looked like leopard skin. (If you're interested in that, though, Countdown had a pretty catty piece along those lines last night. It's here, but the video wasn't available when we checked.) We're content to sit back and chuckle at the deserved comeuppance of another "family-values" hypocrite frantically trying to assert his right to privacy after years of working to impose his Pharisaical moral framework on the rest of us. Dana Milbank has a funny piece on Vitter's sneaky efforts to avoid the press since his return to Washington this week. Ruth Marcus has a spot-on analysis of how bogus the privacy line is, given that Vitter may have committed crimes in his dalliances with Palfrey's alleged prostitution ring. Here are Mr. and Mrs. Vitter, looking not quite ready for their close-ups: 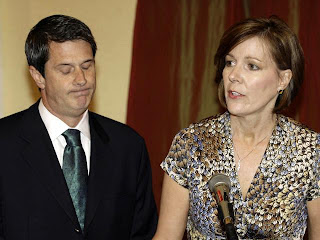 Maureen Dowd: We know we've been pretty tough on MoDo here in Roxie's World recently. We think she deserves our righteous criticisms of her mindless Clinton-bashing, but today we give her a paws up for a good column that rips into the Bush administration following the release of a new National Intelligence Estimate which concludes that "al-Qaeda has protected or regenerated key elements of its Homeland attack capability by reestablishing a haven in Pakistan and reconstituting its top leadership." (See Wa Po's analysis of what the report does to the administration's rationales for the war in Iraq. It's here.) Our favorite lines from MoDo's column are right at the beginning:

Oh, as it turns out, they’re not on the run.

And, oh yeah, they can fight us here even if we fight them there.

And oh, one more thing, after spending hundreds of billions and losing all those lives in Iraq and Afghanistan, we’re more vulnerable to terrorists than ever.

And, um, you know that Dead-or-Alive stuff? We may be the ones who end up dead.

Mormon/Mitt/"Monogamy": We could write a book on this Gordian knot of M words. For the moment, we will merely venture the kind of political prediction that is rare here in Roxie's World, given that we hate to create opportunities to be proven wrong. Nonetheless, we do hereby predict that if Mitt Romney wins the Republican nomination for president, the Democratic landslide of 2008 will make the LBJ landslide of '64 look like a squeaker. We say this because religious bigotry is alive and well here in the United States of Fundamentalism. Wa Po's Chris Cillizza and Shailagh Murray cite a Post/ABC News poll suggesting strong resistance to a Mormon nominee among Republicans. The poll shows that 30 percent of Republican voters said "they would be less likely to support a candidate if he or she were a Mormon. Of that group, forty-nine percent said there was 'no chance' they would back a Mormon for president." Their report is here. We like those numbers so much that we're ready to launch a new group called Democrats for Romney. We also think HBO should start running its fabulous new show about polygamy in the suburbs, Big Love, for free on non-cable stations. The moms think it's the queerest thing on TV now that The L Word is between seasons, but they also think it would do tremendous damage to Romney's candidacy by suggesting that every hard-working telegenic Mormon man probably has a couple of spare wives hidden in his closet.

Okay, kids, time to get up off the couch. Next M word on the list is MOVE. Peace out.
Posted by Roxie Smith Lindemann at 9:30 AM