Apparently, it's Show-and-Tell Day in the academic feminist blogosphere. Missed the memo? Consider this your invitation to participate!

Our dear friend Historiann, whom we have never met in the dimension commonly referred to as Real Life, posted photographs this morning of herself and her husband frolicking in the Colorado wilderness. These are, as far as we know, the first images Historiann's readers have ever seen of the Real People behind the blog. To our surprise and considerable disappointment, Historiann is not wearing chaps or brandishing a lasso in the picture. On the other hand, the head-and-shoulders shot proves beyond the shadow of a doubt that our favorite tenured cowgirl has a very fine neck and a regal way of looking at a camera, which somehow does not surprise us. Think Audrey Hepburn, only outdoorsy-er.

Not to be outdone by our blog pal's sudden penchant for self-revelation, the Beach Blanket Bingo players of Roxie's World are pleased to offer this bodacious image of Moose last week in South Haven, MI, looking for all the world as if she is ready for the swimsuit competition in next year's Ms. Blogosphere pageant: 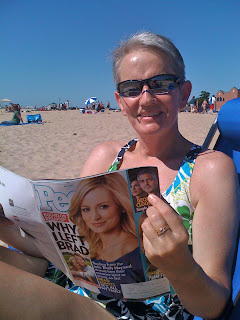 Yes, as a matter of fact, we have lost our minds. It could be the heat has gotten to us. It's hot as heck here in the national capital area today. We thought this photo might help local readers cool off. Also, we thought you'd get a kick out of seeing the reading glasses placed strategically in front of the giant sunglasses, not to mention the kind of high-octane reading material Moose takes with her to the beach. (Look, she had her Kindle with her, too, and actually read a screen or two of Sherry Turkle's Alone Together before nodding off in the sun!) We also felt it was important to immortalize the ridiculous floral bathing suit Moose was forced to buy out in New Mexico when she showed up at a hot springs spa that used to be sex-segregated and clothing-optional. That she is still wearing the suit nearly two years later proves that cheapness triumphs over vanity in la famillle Moosianne.

Mostly, though, we offer this shockingly revealing image as a way of commemorating the six-month anniversary of Moose's Lifestyle Adjustment Program. It's true. Six months ago today she walked into a meeting, stepped on a scale, and made a commitment to eating less, moving more, and feeling better. Tomorrow, she will walk back into a meeting, step on that same scale, and declare herself on maintenance. An important part of the journey will be over. A victory will be (sensibly) celebrated, and a new stage, more challenging in many ways for Moose than the effort to take off weight, will begin. To mark that transition, we offer a photograph, not to brag, shame, or even necessarily inspire, but simply to acknowledge and to remember: For one feisty middle-aged broad, this is what feeling better looks like.

Peace out, darlings. Be well.
Posted by Roxie Smith Lindemann at 3:01 PM