Not Catching the Reverb 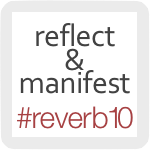 Are you curious to know why Roxie's World is not participating in #reverb10, the super-groovy end-of-year online initiative to get folks to reflect on what's happened in the current year and "send out reverberations for the year ahead"? I mean, gosh, we love nothing better than a bit of navel-gazing, especially when it's combined with the blogging equivalent of a group hug. Plus, you know, we've been known to go a little yogic on y'all from time to time, and some of our bestest blog buds have hopped on board the reverb train. (Love you, girls. Mean it. You are doing some great work in connection with this project, and we look forward to reading every single word.)

Here's the thing, kids. We thought about giving #reverb10 a shot, because we get all goose-bumpy over any opportunity to make our blogging part of a communal, collective adventure. I mean, hell, we're a dog blog, dudes -- We wanna be part of a pack! Shoot, we were even willing to consider committing to posting every fricking day for a month -- on prompts designed by total strangers who seem to have consumed quite a bit more herbal tea than we have! -- in an effort to be a part of this endeavor.

And then my typist sat down and looked at the prompts and realized we couldn't attend this party, because if we did we'd end up misbehaving. We'd either be the wiseacre standing in the corner, dumping a poisonous barrel of snarkitude into a babbling brook of earnestness and sincerity, or we'd be the Debbie Downer, killing everybody's buzz by yammering on relentlessly "about a new disease, a car accident or killer bees." Don't believe a dead dog? Well, take a look at the notes my typist made on the first few prompts: 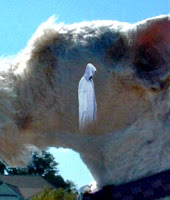 December 1 -- One Word: Encapsulate the year 2010 in one word. Explain why you’re choosing that word. That's easy: D E A T H.  Because that's what happened every time we turned around this year in Roxie's World. We started the year grieving the end of the embodied life of the beloved critter who inspired this quirky little corner of the blogosphere. Halfway through, we mourned the loss of the equally beloved Mother of the Goosians. And we haven't even bothered to acknowledge in this space the recent death of a dear friend whom many of you may know as the director of the best film the Star Wars franchise, The Empire Strikes Back. We're big into Bonus Moms around here, but we only had one Bonus Dad, and that was Kersh. He's gone. That sucks. Our hope is that the grim reaper will leave us the hell alone in 2011. Enough already, 'k?

December 2 -- Writing. What do you do each day that doesn't contribute to your writing -- and can you eliminate it? Apparently, you're not supposed to count blogging as part of writing, so it would appear that pretty much every thing I do every waking hour of nearly every day of my life does not contribute to my writing. Which is, in its way, like, really impressive!

December 3 -- Moment. Pick one moment during which you felt most alive this year. Describe it in vivid detail (texture, smells, voices, noises, colors). Piece of cake: That would be the moment when I felt myself falling forward on a set of concrete stairs, knowing that when I landed something was going to break. That moment is vividly described here.

December 4 -- Wonder. How did you cultivate a sense of wonder in your life this year? By being continually overwhelmed and befuddled, leading me to wonder things like, Who the frack is going to die next? Will Obama and the Dems ever manage to get anything right? Why do I not feel grateful that I broke my left wrist rather than my right one?

December 5 -- Let Go.  What (or whom) did you let go of this year? Why? A whole lot of dead people and critters, dammit, because that's what the universe seems to have decided I will do.

December 6 -- Make.  What was the last thing you made? What materials did you use? A delicious Thanksgiving dinner that was kinda sorta very nearly interrupted by -- Oh, never mind. See prompt for December 1. Yes, the pies helped.

See what I mean, kids? I really don't think you want the surly girls of Roxie's World messing with the happy vibe of #reverb10. Don't worry. They'll recover their equanimity soon. We've ordered a fresh supply of half-full glasses to arrive in time to ring in the New Year. In the meantime, click on over to our forward-looking pals Clio Bluestocking and Dr. Crazy and see what they are planning to (wo)manifest in 2011. You go, girls, while we curl up here by the fire, cover our heads with our paws, and quietly hope we'll get through next year with fewer casualties.

Peace out, darlings, and for dog's sake, stay alive!
Posted by Roxie Smith Lindemann at 11:58 PM