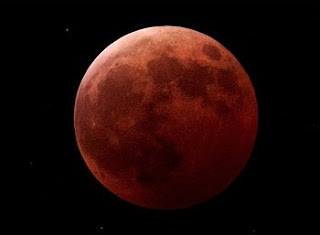 Tonight (by which we mean after midnight, or Tuesday the 21st) is the longest night of the year, darlings -- the winter solstice. And tonight, in case you haven't heard, the moon will go into full eclipse, starting at 2:41 AM Eastern. When was the last time a total lunar eclipse occurred on the winter solstice? Oh, not long ago, as the universe reckons such things -- December 21, 1638, according to NASA by way of WaPo, which is where we picked up that pretty pic of a 2001 eclipse by AP photographer Heribert Proepper. We'll take NASA's word for it -- There were no photos in 1638 and no Intertoobs for speedily transmitting them upon. 1638: The Thirty Years' War ended in March of that year, and Anne Hutchison was banished from the Massachusetts Bay Colony for heresy, also in March. We learned that on the Intertoobs, with a little help from our faithful research assistant, Wick E. Pedia.  Oh, and King Louis XIV of France was born, on September 5.

What does it mean, this remarkable convergence of astronomical shenanigans? Two things at least, my pretties: 1. As of tomorrow, the days start getting longer, which dramatically increases the possibility that life will start sucking less. 2. My typist has a certain cheesy song from 1983 stuck in her head, and the only way to get it out is to pass it along to you. I am so very sorry for subjecting you to it, but it's a bitterly cold night and her grades aren't finished yet. We simply must get the cheesy song out of her head.

Peace out, darlings. Snuggle up to something, for dog's sake, lest you freeze to death -- or fall apart.

Email ThisBlogThis!Share to TwitterShare to FacebookShare to Pinterest
Labels: holidays, music, the planet