It Gets Better -- according to a small, brave group of openly gay college presidents, who made this video, which we picked up here, at the Chronicle of Higher Ed, and which you should watch in case you find yourself, on this chilly Friday before Christmas, feeling the need for an uplifting message about hard work, visibility, and success:

It Gets Worse -- or certainly could, according to our pal, Columbia law prof Katherine Franke, who kills the buzz about the prospect of finally ending the odious Don't Ask, Don't Tell policy by pointing out that allowing gays and lesbians to serve openly in the military is likely to lead to a significant increase in hazing, harassment, and violence toward such service members, at least in the short term. Considering the military's (horrible) record "of preventing and prosecuting violence against female service members under the current regime," Franke observes, "why should we think they’d do any better in addressing harassment and violence against lesbians and gay men?" Good question! Go read the whole piece, especially if you have been eagerly awaiting the day when donning now your gay apparel would mean dressing up like the guys on the left rather than the happy fellow on the right. 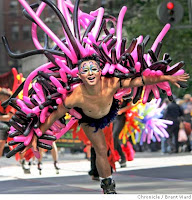 Whatever you wear, darlings, be fabulous and have fun! Peace out.
Posted by Roxie Smith Lindemann at 6:14 PM