Feisty Old Broad of the Week

And it's only Wednesday! I know, I know, the regulars are thinking, Wait just a goldurned minute -- Roxie's World has never had a "Feisty Old Broad of the Week." Not that I object or anything, but is this just a cheap, quick way to throw up a post in the midst of late-semester madness? To which we can only reply: Hell to the yeah, darlings! You betcha!

Anyhoo, back to our FOB of the W. Her name is Betsy Stanford. She lives in Northwest DC. She just turned 107. And she earns the FOB of the W prize because she shares our fundamental belief, which we might have stolen from someone else, that everything bad is good for you. For example, what does Betsy recommend you eat if you would like to live to be a spry century + seven? Why, anything! she tells WaPo. Everything!

"Juicy steaks . . . pork chops - as much as you want!" Stanford exclaims. "Everything they say not to eat, I've been eating it since I was 45 years old." (Puzzled aside from my typist: Why the late start, Betsy? I've been eating badly from the day I met my first Cheeto back in nursery school.)

And what's her idea of a pick-me-up? A smoothie, of course,"made of Guinness stout mixed with the nutritional supplement Ensure, a drop of vanilla flavoring and a sprinkle of nutmeg 'if [the stout] is too bitter.'"

A 107-year-old church-going lady who drinks stout? Oh, yeah, Stanford says: "I drink stout. It's good for you, baby!"

A smoothie made out of Guinness and Ensure? Oh, Betsy, my swooning typist says, can I hang out with you in the retirement center? Can we play Bingo in the afternoons and spend our evenings getting loopy on Guinness while we yell about all the morons on the teevee?

Get a grip, Moose. Betsy's game of choice is Scrabble, but she isn't even in a retirement home. She still lives in the home she moved into with her husband in 1976. Ah, so among her other feisty qualities, Mrs. Stanford is an independent gal who has managed to age in place, thanks in part to an extended network of supportive, nearby family. (Stanford never gave birth, but she raised a nephew whose children consider her their grandmother.) That's a point worth keeping in mind as we ponder the question of how to age well -- and we do ponder that question 'round here, pretty regularly in fact.

Wevs, kids, let's raise a pint -- hold the Ensure, please, for now -- to Betsy Stanford, for proving once again that being what the nutri-nazis and the pleasure phobes call bad can do a soul good. (As we noted just the other day in calling your attention to Richard Klein's tantalizing "The Case Against Health.") It's good for you, baby! We'll drink to that, Mrs. Stanford, and to you. Live well, live long, and speak the truth. Peace out. 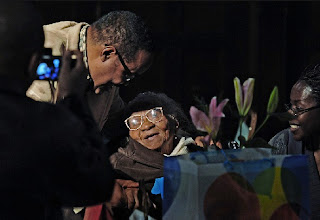 (Guinness image picked up here.)
Posted by Roxie Smith Lindemann at 9:47 AM