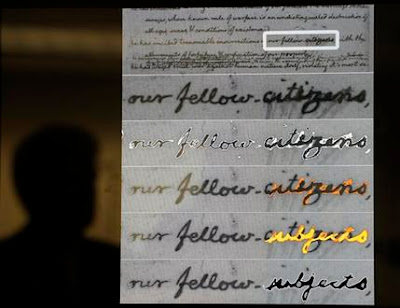 (Photo Credit: Susan Walsh, AP. AP caption: "James Billington, the Librarian of Congress, is reflected in a computer screen at the Library of Congress in Washington, Friday, July 2, 2010, showing a correction to the rough draft of the Declaration of Independence written by Thomas Jefferson.")

Our history pals are all doing historical posts as a way of commemorating Independence Day. (Go, Betsy Ross! Go, Chinese soldier killed in the Civil War whom we had never heard of before!) We figured we better get in on the action, lest it appear that English profs were America haters or something. Happily, we woke up to a front-page story in this morning's WaPo that gives us a perfect opportunity to demonstrate that the kinds of skills and expertise English profs have are vital to the nation's interests and security, even, indeed, its very identity. At the same time, it allows us to join in the effort to knock down an incredibly shallow and obnoxious attack on some of those skills that was published online in The Atlantic this week. Opportunities like this don't come along every day, so I persuaded the moms to stop watching reruns of Rafael Nadal's Wimbledon semifinal win over Andy Murray and come up with something pithy to say about readin', writin', technology, and, you know, the birth of the nation.

The backstory: That super-cool image at the top of this post is from coverage of the super-cool announcement yesterday by the Library of Congress that researchers had used spectral imaging technology to uncover a significant revision Thomas Jefferson made in a rough draft of the Declaration of Independence. (The WaPo story does a really nice job of explaining the details of the deciphering process. Go read it if you love a good high-tech detective story, and, seriously, who doesn't?) Scholars had speculated for decades that Jefferson had originally used the word "subjects" when he was drafting the section of the Declaration focused on the grievances against King George III that fueled the movement for independence but erased it and changed it to "citizens." A tell-tale smudge behind the word "citizens" suggested that a revision had taken place, but, because Jefferson was so careful to obliterate the word in this instance -- rather than merely crossing it out and substituting another, as he does in many other instances in the draft -- the tools of hyperspectral imaging were necessary in order for the LC's team of scientists "to bring the erased word back to life," as WaPo's Marc Kaufman eloquently puts it.

The team was led by Fenella France, who describes the "spine-tingling moment when I was processing data late at night and realized there was a word underneath citizens" in the LC's announcement of the discovery. Library of Congress preservation director Dianne van der Reyden wisely used the occasion to point out the importance of keeping and protecting original documents. The subjects/citizens revision wasn't in subsequent drafts, so the excitement here arises partly from the sense that what has been recovered is the exact moment when Jefferson recognized the political/philosophical stakes of declaring an end to monarchical rule in the United States. In changing "subjects" to "citizens," he signals the beginning of the democratic experiment that endures, despite a civil war and a botched presidential election or two, to this day. Lose or destroy the document, and you lose an important window onto that moment of transition and emergence.

Goosebumps, right, kids? Makes you want to run right out and take a look at the draft of the Virginia constitution Jefferson was copying from when he was working on the Declaration, doesn't it? Knock yourselves out, fellow citizens-not-subjects. (He uses the term "subjects" in the Virginia document.)

Now, what was that you were saying about close reading being boring? about students "almost universally hat[ing] it" because they don't really get it and should be reading more books quickly rather than fewer slowly -- presumably because being stupid about a lot of books is better than being stupid about just a few? Huh?

Here's the thing, gentle readers: Close reading, taught badly, can be dull as hell, but taught well, by someone attuned to the infinite richness of language, punctuation, and even the material aspects of texts, it can be sheer delight and a revelation. The LC's marvelous bit of detective work on Mr. Jefferson's revision process shows us the extraordinary possibilities new technologies hold for making us better -- more careful, much closer -- readers of the past. There is nothing dull or tedious in seeing how hard Jefferson worked to rid his document of the traces of the word "subjects" and to cover it over with the word and the ideal that he hoped, for all his flaws and contradictions, to bring into being: "citizens." One could learn a lot about American history by attending well to that single alteration, by parsing out the tale told by the smudge that time never forgot and technology finally removed.

This Independence Day weekend, let's raise a paw to close reading and to the fine work being done at the library Mr. Jefferson helped to establish. Read a book this Fourth of July, and read it well. Thinking well is your duty as a citizen-not-subject. Peace out.
Posted by Roxie Smith Lindemann at 6:14 PM