Tell Us If You Felt It

That would be affirmative, WaPo.  Oh, boy, you betcha.  And how.

The little earthquake of 2010 that shook the Washington, DC area shortly after 5 o'clock this very a.m. was assuredly felt in Roxie's World.  Both moms were startled into wakefulness by an eerie rumbling noise that shook the house for several seconds.  WTF, Moose muttered, is that an earthquake?  Goose of course was skeptical, because that is her nature, but she was inclined to agree with her sleepy yet perceptive partner when she realized she didn't hear the gears of an exceptionally large truck grinding its way through the neighborhood in the predawn hours, which was the only other possible explanation she could imagine for such a rattling and rolling of the usually steady world.

Here is the U.S. Geological Survey's poetically named "ShakeMap," which shows that the epicenter of the 3.6 magnitude quake was about 20 miles north and west of our ridiculously large backyard, in Montgomery County, MD: 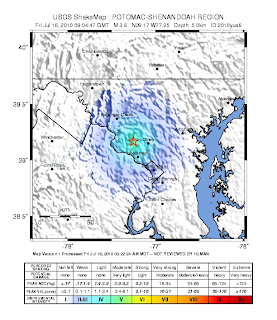 As soon as the tremors subsided, Moose's first thought was, Hey, I should put something up on Facebook.  She fell back asleep before that thought could be actualized, but when she awoke the first thing she did was to check Facebook to see if friends and neighbors had also felt a certain rumbling in the night.  Sure enough, they had.  Her news feed was full of comments, quips, and links to reports on the quake.  It was a delightful way to get a personalized ShakeMap -- and to get insight into the sleep patterns of her friends by noting who slept through the quake and who was awakened by it.  She quickly weighed in with a couple of quake-related status updates, the cleverest of which was, Is that an earthquake, or are you just happy to see me?

Note the pattern of information-seeking here, my friends.  Moose didn't turn on the television or click on the WaPo website.  She went to a social networking site, to get a sense of how the quake was experienced by friends and neighbors.  Had the quake been more serious, that obviously would not have been the case, but this feels like a modest yet significant example of how new media tools have changed our patterns of information consumption and our ways of experiencing such events.  They are personal and public, simultaneously and instantaneously.  That is a big -- one might even say seismic -- shift in our way of being.

So tell us, darlings, did you feel the little earthquake?  Let us know!
Posted by Roxie Smith Lindemann at 11:20 AM

Email ThisBlogThis!Share to TwitterShare to FacebookShare to Pinterest
Labels: my moms, takoma park