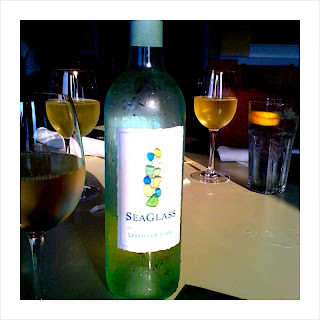 I know it's early in the day to be drinking, kids (and we certainly don't encourage wine before breakfast), but my typist has a lot to do today and has had this pic of a pleasant sauv blanc with a pretty summery label just sitting in her phone waiting for an excuse to be shared avec vous, so we thought we'd use it to set up a little midsummer reading list to keep you occupied while she works on the paper she'll be giving at the big Emily Dickinson shindig in Oxford in a couple of weeks.  (Don't get confused, darlings.  Moose hasn't gone and turned herself into a poetry geek.  She'll be presenting a piece of her new stuff proving that every woman writer who ever mattered at all would have made one heck of a blogger.  Dickinson fits into that odd paradigm rather nicely, as it happens.  [See also this brief report on what she did at last summer's Willa Cather shindig.])

Oh, if you've wandered in here by way of Shakesville (which kindly included our critique of The Kids Are All Right in yesterday's Blogaround), welcome to Roxie's World!  We are delighted to see you.  We don't do movie reviews every day, but we try to do something fun and socially redeeming on a regular basis, so give us a click when you've got a moment to kill as you wander the Interwebz.

Anyhoo, here's a bunch of stuff we've been collecting on a range of subjects -- queer intimacies! higher ed!  reading! -- likely to be of interest to our marvelously motley crew of readers.  Read, ponder, discuss, and for dog's sake hydrate, my pretties.  We've got another scorcher on tap for the eastern half of the US of A today.
Ah, that feels better!  Now we can close some of those tabs and get down to work.  Happy reading, my pretties, on the gorgeous little gadget of your choice.  Peace out.

Posted by Roxie Smith Lindemann at 10:54 AM