Roxie's Watching: The Kids Are All Right 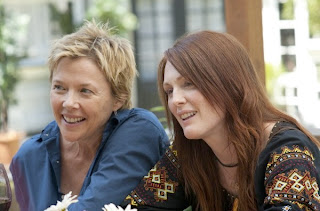 (Annette Bening and Julianne Moore in The Kids Are All Right.  Photo Credit:  Suzanne Tenner via)

First things first:  Annette Bening plays good gay.  Or plays gay good.  Er, well. Wevs, kids.  Suffice it to say we were convinced enough that we'd pick her for our softball team in a heartbeat.  Julianne Moore does a fine job, too, by the way, despite her character's unfortunate foray into sex with a dude halfway through Lisa Cholodenko's vexing The Kids Are All Right, which finally opened yesterday in the DC area.

Before this goes any further, we want you to understand that we are not in principle opposed to lesbians having sex with dudes.  Or to Sapphists using gay male porn to spice up the boudoir.  Or double-headed vibrators.  Or bickering and micromanagement within the context of intimate relationships.  We are not wild about infidelity if the partners in a relationship have committed to being monogamous, but, hey, nobody's perfect.  Also, we have never really gotten into composting, but we make no judgments about those who do.  Finally, we disagree with our pal Jack Halberstam, who claims in an otherwise spot-on critique of The Kids Are All Right that Julianne Moore looks dowdy in the film.  We think her look is a hippie-groovy southern California thing that's kinda gay, kinda motherly, and kinda the granola crumbs left over from a particular moment of mid-70s womyn's culture.  In any case, all due respect, Jack, we do not believe the words "Julianne Moore" and "dowdy" belong in the same sentence.  Oh, and unlike Halberstam, we've got no problem with Bening's and Moore's characters being referred to collectively by the film's titular "kids" as "the moms," because, well, that's the way we talk here in Roxie's World, too.  It's a way of (affectionately, ironically) marking the otherness of parents and children or humans and animals as they negotiate intimacies-across-difference.

So, those aren't the things that bug us about this big, widely acclaimed flick about two lesbian moms and their two sperm-donor kids, played marvelously by Mia Wasikowska and Josh Hutcherson, coming of age and establishing contact with the sperm donor, Paul, played by Mark Ruffalo.  No, what finally -- and deeply -- disappointed us about the film, despite the splendid performances and some pitch-perfect moments of dialogue, were what felt like multiple failures of imagination in its depictions of lesbian sexuality, long-term partnership, and queer family-building.  In the end, to use a metaphor in keeping with the film's upscale SoCal look and value system, The Kids Are All Right opts to put new wine in an old narrative bottle, and the result is a vintage that looks good but leaves a nasty, corked aftertaste.

The complaint here isn't that queer family stories should offer up sanitized, positive images of homodomesticity -- you know, multi-orgasmic wonder dykes who perfectly understand and communicate with their children; cheerful, gender-queer kids who never suffer a moment of existential doubt; bio-dads who play a meaningful role in the children's lives without feeling a need to take over the family.  Such stories would be limited both in their appeal and in their social or political value.  Who needs a queer Cosby Show, after all?

Nonetheless, it is disheartening that "the most widely distributed lesbian-themed mainstream movie in history" depicts sexual intimacy between long-term female partners as mutually unsatisfying drudgery, shows lesbian moms to be neurotic, smothering, and insecure about their ability to parent (especially male children), and represents families as rigid, stifling entities that negotiate threat by expelling outsiders rather than re-imagining family in more flexible, capacious, and generous terms.  Within the narrow terms of the film, Paul can only enter the story as a kind of Prince (or should that be Prick?) Charming But Dangerous.  Without appearing to mean to (but that is part of Paul's sleepy-eyed shtick), he seduces the kids, Joni and Laser, with organic vegetables and a few easy words of wisdom about how to get out from under the maternal thumbs.  He then seduces Moore's character, the insecure Jules, with -- well, what exactly?  We think it had something to do with his understanding the word fecund, but that can't possibly be right, can it?

Bening's character, the uptight Nic, immediately recognizes Paul as a threat and ultimately banishes him from the family as an interloper, but not before she has been subjected to the humiliation of Jules' infidelity with him -- and not before the audience has been subjected to scenes that encourage the belief that real sex requires a penis and, hey, maybe femmes aren't really lesbians after all.  In the film's last scene, Nic and Jules seem tentatively reconciled, fingers intertwined in the front seat of a car in an affirming gesture that recalls the closing shots of Thelma and Louise.  "I don't think you guys should break up," Laser says from the backseat.  "Why not?" one of the moms asks.  "Because you're too old."  These latter-day heroines avoid the cliff's edge, but they seem stuck in a landscape of phallic power not all that dissimilar from the one that drove Thelma and Louise to take the only escape route available to them.  It's hard to say which female pair got the least happy ending.

It could well be that the quest to be "the most widely distributed lesbian-themed mainstream movie in history" was the undoing of the story The Kids Are All Right might otherwise have told.  As the charming queer friend with whom Moose and Goose saw the film remarked, "I had the feeling this movie wasn't really targeted at me."   Lisa Cholodenko, who also wrote and directed 1998's High Art, is certainly capable of more nuanced and queerer storytelling than we get here.  Our feeling was that the story started out strong and funny, poking fun of the vicissitudes of partnership and parenthood and taking up tricky but worthwhile questions about what it means to be biologically related to a complete stranger.  For us, though, the story ran off the rails when Jules slept with Paul and never really got back on track.  In taking that turn, the film gratifies the straight male fantasy that what every lesbian needs is a good straight roll in the hay and presents lesbian relationships as cheap imitations of the worst heterosexual marriages:  like them in being riven by conflict, frustration, and inequality, unlike them in lacking the almighty penis.  There were obviously other narrative possibilities available, but Cholodenko seems to have been too firmly committed to proving that this "unconventional family," as Paul describes them in a toast, is depressingly like every other grim, dysfunctional, but inescapable family we have ever encountered in life or art.  Can't live with 'em, can't live without 'em, the film seems to say -- Well, you could live without that particular model of family life actually, but it takes a bold leap of the imagination and will to make and sell stories about other ways of building families and intimacies that can be sustaining and satisfying rather than just grimly, painfully, corrosively endured.

Marriage is, as Jules says late in the game, "hard":  "Two people, year after year.  Sometimes you just stop seeing the other person."  That's true, of course, in any long-term partnership, with or without children, in or out of sunny southern California.  Still, long-term intimacies do have their pleasures -- even sexual ones, insist the ornery but discreet geezers of our acquaintance! -- and families can be strong without being insular and inflexible.  It's unfortunate that Cholodenko's film, for all its strengths and all its box-office charm, doesn't have the guts to show some of those pleasures and possibilities.  No, we have no right to burden artists with the demand for positive role models and happy endings, but surely we can see that the kids might do better than "all right" if we were prepared to help them first to imagine and then to build a better world.

Seriously, folks, let's skip the cliches about lesbian bed death and needy, overly protective (s)mothers.  We've got a fine new wine here in the phenomenon of non-heterosexual family-making.  Betcha anything it would taste better if we poured it into a beautiful new bottle.  I'll drink to that, darlings, and I bet you would, too.  Peace out.
Posted by Roxie Smith Lindemann at 11:47 PM