For Your Tentacles Only

We've got a special treat for all the good girls and boys of Roxie's World this morning. You know we've always got a paw on the pulse of the zeitgeist around here. We keep our noses to the ground, sniffing out the Next Cool Thing for our legions of loyal and uber-cool fans. Hey, it's a tough job, but who better than a dead dog and a couple of cranky old dykes to let you know what's hip and happenin'? Right, I know.

Anyhoo, mes amis, you'll be wanting to update your personal Cahiers du Cinéma once you've seen this brilliant short film that has just emerged from that epicenter of creativity, Rodgers Forge, MD. (What? You didn't know? Wow, you do need us, don't you?) It's the latest work from a soon-to-be-famous studio that we hereby name A Boy and His Dad Productions. Aaron is ten and his dad has recently introduced him to the James Bond movies, because, well, how better to teach a young fellow that blend of elegance and ingenuity so essential for thwarting evil and poor taste? 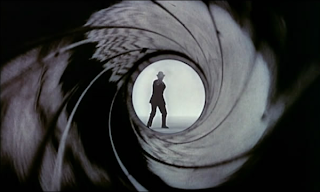 This being the 21st century, watching films necessarily leads to the making of films, so Aaron and his dad hunkered down in their basement studio to produce this stunning Bondian homage, For Your Tentacles Only. The film is a surprising contrast to the pair's most recent previous work, a gritty documentary, Aaron's Snow Fort, produced in the unremitting winter of 2010. That film is Bergmanesque in its evocation of a child's poignant effort to create a sanctuary for himself in the harsh blue-and-white world of Snowpocalypse. There, a shaky hand-held camera follows Aaron down into the labyrinth of his chilly lair, as he explains in careful detail each element of its complex design, including a fiendishly clever garbage disposal. (Yes, yes, close readers -- That is the machine finding its way into Aaron's winter garden. You are almost as smart as he is!)

The new film shifts from documentary to action and from gritty to gripping in the intensity of its suspenseful plot, as we watch Green Gecko work to stymie the attempt of Octopussy to flood the world so that octopuses can rule it. We would point out the myriad ways in which For Your Tentacles Only brilliantly mines the Bond oeuvre for insights into the nature of evil, but the truth is we haven't seen a Bond film in at least twenty years, so we will have to be content to give Aaron and his dad an enthusiastic PAWS UP for cinematic achievement involving stuffed animals, Legos, and magnetometry. (Keep your eye on the penguin at around 1:14, and you will see what we mean about magnetometry.)

Oh, and we'll point you in the direction of this new post by Timothy Burke that takes up the question of postmodern parents and kids hanging out and doing things like making movies together. Is it, as Burke suggests, a way of generating cultural capital, or is it just, you know, fun? We'll leave it to you to decide, but first you have to watch the movie!

Enjoy, darlings, and stay tuned to Roxie's World for all that is cutting edge and, um, cute. You may leave your praise and trenchant commentaries on the dazzling intertextualities of For Your Tentacles Only and other Bond/ian films in comments. Free popcorn and a shaken-not-stirred martini to the author of the cleverest remark.

(With love and many thanks to Aaron and his just tenured [YAY-YYYYYY!] cinematographer. You rock our world, boys. Thanks for being in it.)
Posted by Roxie Smith Lindemann at 9:10 AM

Email ThisBlogThis!Share to TwitterShare to FacebookShare to Pinterest
Labels: film