The ABCDs of Basketball 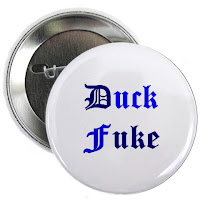 For the past couple of weeks, as the NCAA basketball tournaments (wimmin's and non-ladies') have careened along from one buzzer-beating, heart-stopping game of the century to the next, the moms have engaged in a steady stream of virtual trash-talk on Facebook, the gist of which, from their perspective, can be expressed in a new rule that Moose announced when she found herself in the awkward position of rooting for Purdue to beat Duke in the Sweet 16. (That was awkward because she comes from a long line of graduates of her native state's other big honkin' public institution of higher ed and basketball, Indiana University.) Anyway, she bit the bullet and declared that she would follow a simple rule to figure out who to root for in any given game: ABCD, she said, meaning Anybody But Connecticut or Duke. Regular readers need no explanation for the "D" part of the rule; the "C" part stems from our constitutional aversion to dynasties and our boredom with the whole Connecticut is unbeatable meme. Oh, plus our pals up at Bruce Springsteen State U (which plays in the Big East) just loathe and detest Geno Auriemma, so we decided to hate him, too, in solidarity with them.

The ABCD rule was strongly in force Monday night as the moms hunkered down in front of the TeeVee for the non-ladies' championship game between the Evil Empire and yet another Indiana school, the one that Moose has never taken especially seriously because it's an itty-bitty private school in some athletic conference she's never heard of. For the night, though, she was happy to follow the logic of ABCD and declare herself a Butler fan. She spent much of the nip-and-tuck game taunting her Duke pals on Facebook and texting furiously with her big brother, another IU grad who lives in Indianapolis and had embraced the cause of the underdog Bulldogs along with all the other Hoosiers still waiting for IU to rebuild its storied basketball program. (Trust me, kids, had IU been in the dance, no one in the state but Butler's boy wonder coach Brad Stevens' mom would have cared if Cinderella managed to get her foot into that slipper. Oh, but speaking of Stevens' mom, she gives a cute interview about her son, who we really think is the most accomplished 12-year old we've ever seen, here.)

Anyway, as the second half of the game went on, with Cinderella relentlessly refusing to admit she was no match for the three mighty Prince Charmings (Jon Scheyer, Nolan Smith, and Kyle Singler) of Duke, Moose suddenly found herself in strange emotional territory. She realized she was no longer watching the game primarily because she hoped Cinderella would find a way to outsmart Prince Charming and snatch the trophy away from the Imperial Army of Durham. She was watching because it was quite simply one of the most glorious games she had ever seen, despite the fact that it was a low-scoring defensive tug-of-war rather than the kind of up-tempo transition game she usually enjoys. For a few minutes, her hatred of all things Duke (I mean, you know, all things basketball-related) melted away, and she sat, mesmerized and breathless, as two talented, brilliantly coached teams battled back and forth to see which would manage to be in the lead when the final buzzer sounded.

As it turned out, of course, the storybook ending was still -- literally -- up in the air as the clock expired. Butler's Gordon Hayward managed to get off a last-second shot from half-court that would have given Butler the win if it had gone in, but the shot hit the backboard and the front rim before falling futilely away from the basket. And just like that, the season was over, and Duke coach Mike Krzyzewski had his fourth national championship. 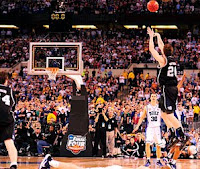 In the closing minutes, Moose put a status line up on Facebook that probably shocked friends who expect torrents of anti-Duke invective from her any time the Blue Devils are on the floor. "Gotta say it," she confessed. "Just. Loving. This. Game." To her surprise, the feeling held up even after the game ended and the Duke celebration began. Perhaps it was because Coach K was both gracious and humble in victory. He looked a little shocked himself, as he tried to absorb the outcome. He heaped praise upon Butler and seemed slightly mournful about the game being over. "I love this team," he said, "and this is the last time we will ever play together." (We think that's what he said, anyway. Oddly enough, it's hard to find transcripts of court-side interviews, and we haven't been able to track down the vid either, but Krzyzewski says something similar in this low-key interview with ESPN's Andy Katz: "A lot of teams take stuff from you because you're trying to convince them to do things. This team filled you up . . . . I hope I'll have a team like this again. I really do.")

It's hard to hate a guy who chokes up at the realization that victory in sport is not, as we so often seem to imagine, some kind of triumph over death but is in fact a form of death. The buzzer sounds, and, win or lose, the teams who have played this spectacular game are teams no more. You can hardly blame Coach K for seeming like the bar patrons in those Buffalo Wild Wings commercials who plead to have games sent into overtime in order to extend the pleasures of watching them. We didn't want this one to end either, Coach, and for once that was not because we couldn't bear to see you and your team win. Games like this make us proud to be fans of college basketball, despite all its flaws and its tendency to produce, if not flat-out corruption, then often badly skewed priorities. Games like this remind us of why we started saying a few years ago that we heart college basketball because it's "like life, only sweatier." We don't want the game to end because we don't want the team and all its dreams and all the parts of ourselves wrapped up in those dreams to die.

(For some wonderful writing on the Duke-Butler game by actual sportswriters, check out John Feinstein in WaPo and Joe Posnanski in Sports Illustrated.)

Of the wimmin's championship, played last night in San Antonio, we have next to nothing to say. The ABCD rule failed to prevent Connecticut from winning its second consecutive title and its 78th straight game. (Shall we pause here for a moment while my typist yawns over her keyboard? Feel free to get up and stretch if you, too, are bored contemplating the sheer perfection of UConn.) It was a weird, ugly game, with Connecticut held to just 12 (yes, 12!) points in the first half and Stanford once again folding more or less quietly in the second half under a barrage of brilliant shooting from junior Maya Moore. The only bright spot as far as we are concerned? Well, um, our blog pal Tenured Radical is happy with the outcome. That's the best we can do, sports fans.

Final thoughts on the basketball season just concluded? Flat-out most memorable moment of the tournament has to be seeing West Virginia coach Bob Huggins down on the floor trying to console senior Da'Sean Butler, who collapsed with a torn ACL in West Virgina's semifinal game against Duke on Saturday. It was a remarkable moment of raw emotion that gave viewers a rare opportunity to witness the powerful intimacy of the coach-player relationship. (See the vid here, if you think you can handle it.) We're tempted to label it the greatest instance of inter-racial homoeroticism since Jim urged Huck to come back to the raft, but such snarkiness wouldn't be fair to Huggins' great compassion and Butler's obvious agony. Instead, we will end by commending the Mountaineers for a gritty performance and wishing Butler well on his recovery.

Until next season, my friends -- When we shall return to pure, unbridled Duke-hatin' and the logic of ABCD will save us from basketball boredom, I promise!