Sorry for the light posting, kids. My typist is on the road, visiting family in her native state and attending a symposium honoring the brilliant, generous teacher who had everything to do with her getting the heck out of her native state and becoming an English prof instead of a bourbon-drinking small-town journalist running from a school-board meeting to the police station to see which neighbor kid had been busted over night for skinny-dipping in the country club pool.

More on the symposium and the teacher later. Her heart is too full of love and gratitude right now to type on that subject without weeping over her laptop. Instead, we offer her latest ToyCamera creation, a pic of the new reading glasses she had to buy in the airport after the skinny blue ones she was so terribly fond of somehow disappeared on the shuttle from the parking lot to the terminal. Her new blue glasses are much bigger than her old blue glasses were, but she rather likes them and thinks that they may be less likely to slip away unnoticed than her old blue glasses. Moose doesn't like having things just slip away, even such insignificant things as a pair of glasses. Such losses gnaw a little, if only at the edges of her heart/mind.

Put the glasses on top of your head when you're not using them, I say to her tenderly. That way, they will be less likely to get lost. Silly old Moose, in transit and absent-minded, seeing ghosts of the girl she once was, no matter what glasses she wears. Travel safe, Moose, and come home soon. 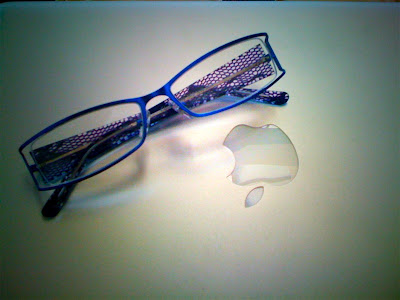