Or, Somewhere in California, a Provost Is Sighing 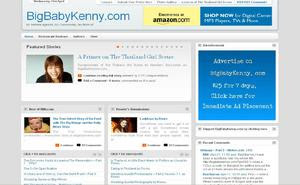 Yes, darlings, it's true -- BigBabyKenny.com, the indispensable blog about straight male sex tourism in Thailand built by a tenured Econ prof at Cal State Northridge, is no more.

Y'all know the unofficial motto of Roxie's World is Tenure means never having to say you're sorry, but Kenneth Ng apparently said Uncle, giving up his noble defense of free speech and his right to spend his non-work hours advising guys on where to go to find underage girls about a week after the site caught the attention of the LA Daily News. (Here is the story that originally outed the site. Here is the story on its being taken down. Here is Inside Higher Ed's report on the issue. H/T to this post at Student Activism, which first called our attention to the story.)

Under pressure from administrators, who had known about the site for months before it was publicly disclosed, Ng took the site down on Friday, after he and the administration somehow figured out that its existence "tarnished the university's reputation." No, really, fellas? Are you sure about that? I mean, it's not as if he produced it during school hours or using state resources! Can't a guy devote his leisure to helping travelin' dude bros negotiate a price so low that pimps will beat up their prostitutes for agreeing to bargain-basement terms? (No links here, but Angus Johnston has summaries of some of BigBabyKenny's more disgusting posts and links to copies available in Google's cache here. Trigger warning for revolting celebrations of child prostitution and physical abuse of women.)

After the site was taken down, Northridge Provost (and I swear we are not making this up) Harold Hellenbrand issued a statement commending Ng for his belated exercise of good judgment and acknowledging the tensions and conflicts around the case:

I thank [Ng] for his reflection and removal of the site. I thank the University community for their comments.

I understand that some people will be disappointed that we did not force the site’s closure; others already object that university leadership was critical of a university employee’s speech.

We are trying to balance two principles that, in this case, clashed. Our commitment to gender equity compels us to see the site as offensive; our commitment to expression urges us to tolerate words and pictures we find intolerant. As university leaders, we believe open debate is critical to ordering our values and determining our acts. While belief in an absolute right to censor might initially comfort us; “our” and “us” has a way of quickly narrowing to “you” and “me.” Then the danger is that exclusion and exploitation, the acts that initially incited us to censor, become the rules of the day.

Translation: Boy, did we get our a$$es burned on this one! Feminazis dusting off their old copies of "The Traffic in Women," free speechers climbing the flagpoles in defense of the right to be disgusting, reporters sniffing around asking questions about the line between work and leisure in the lives of professors and the conflict between individual freedom and professional responsibility! Yikes, fellas! What's a provost to do?

Seriously, folks, we're curious to hear what you think about this case. Should the Northridge administration have demanded that the site be taken down as soon as it learned of its existence? If so, does that mean we are comfortable with universities censoring employees' off-campus speech? Sure about that? Where do we draw the line? What if Northridge had pressured a faculty member with, say, a blog that was critical of university policies and actions? Hellenbrand has a point about the clash of principles involved here. Tell us where you come down in the vexing conflict between free speech and civility. On your marks, get set, discuss!

(Image Credit: BigBabyKenny.com, via)
Posted by Roxie Smith Lindemann at 10:25 AM