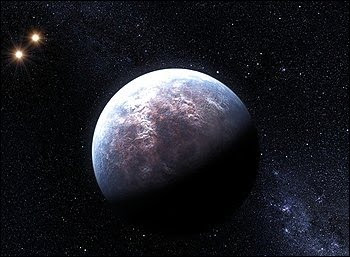 (Image Credit: An artist's rendering of what some of the 32 planets recently discovered outside our solar system might look like. From European South Observatory, via AP and Wa Po, 10/19/09)

Contrary to what my typist seems to think, there is a lot more going on in the world than hikes, hot tubs, and the moral/economic puzzle of the value of art in the age of academic furloughs. Just to let you know we've been paying attention back here at the global headquarters of RW Enterprises, LLC, we've compiled a list of highlights and lowlights we've noted in recent news coverage and commentary. As always, we welcome your thoughts, snarky or otherwise.

It’s hard to see how any public official can challenge a culture that he is marinating in, night and day.

(Frank Rich, explaining why Treasury secretary Timothy Geithner has done such an underwhelming job of regulating the financial industry.)

Specious Analogy of the Week (and it's only Monday!):

(Cal State Stanislaus President Hamid Shirvani in The Chronicle [access by sub only] calling for an end to what he sees as a culture of entitlement in higher ed. Why do we get the feeling that diversity programs and the humanities would be considered ice cream in the outcomes-obsessed, low-fat diet Shirvani advocates? Go over to engineering, kids, and get your spinach!)
A Vastly More Fun and Promising Idea for Saving Higher Ed: Female profs as bodybuilders! C'mon, Historiann, flex those muscles! I will let you use my laptop if you will let me use your self-tanner, 'kay?
Understatement of the Millennium:

(From Keith Bardwell, justice of the peace in Tangipahoa Parish, Louisiana, who has drawn just a wee bit of criticism for the constitutionally questionable move of denying a marriage license to an interracial couple due to his selfless and obviously devoid of prejudice concern for the offspring of such unions. You know, offspring like this guy. And, oh yeah, this guy. By the way, Justice Bardwell, you are right on that point at least. Everybody does hate you!)
Grotesque Misstatement of the Millennium, Brought to You by the Department of We Are All Post-Racial Now:

(The same Keith Bardwell, responding to a hypothetical question about whether or not he is a racist. Bardwell goes on to explain that his definition of a racist is "to hate black people, or treat black people different" than anybody else, which, in his judgment, he does not do. Oh, no, sorry, Justice Bardwell, you are wrong on that one, which means you only scored 50% on our cultural literacy and sensitivity quiz. That's a big F, sir. Bye-bye! You might spend your retirement reading up on recent -- as in, you know, within the past 40 or so years -- developments in marriage law in the United States. Start here, and call us if you have any questions, all righty?)
Best News We've Heard All Day: 32 new planets discovered. (See artist's rendering above.) Beam me up, Scotty! I need a new world to conquer. Or some quiet, unsullied alternative to the mess we've made of this one.
Thoughtful Piece on Marriage Equality You Should Read Unless the Idea of Reading One More Piece on Marriage Equality Takes You Right to the Edge of Vomiting or Violence: by Princeton's Melissa Harris-Lacewell in The Nation. She's smart, and we dig her support for the cause, though we also think this piece, which glances at a forthcoming book by Frances Smith Foster on the history of African-American marriage, is just a little bit starry-eyed on the emotional and spiritual benefits of marriage.
Best Book Moose Has Read in Her Undisclosed Location: Marilynne Robinson's Home. It kept her up late. It made her weep. It brought back the beautiful, brutal, laconic Midwest of her misspent youth with a clarity and truthfulness that took her breath away. It almost made her want to go back to teaching so she could put together a seminar on Robinson, Toni Morrison, and the Whole, Hot, Tangled Mess of American Culture.
Almost, darlings. You know Sabbatical Girl is going to put many more miles on her hiking boots before she trades them in for her black Naots and returns to the classroom. Hope to run into you out on the trail. Meantime, let us know what's happening in your neck of the woods. Peace out.
Posted by Roxie Smith Lindemann at 3:15 PM