Moose will hit the road to begin wending her way back to Roxie's World one week from tomorrow. How happy are we about that here at the home office? Let's just say the reaction is a little something along these lines:

That means, of course, that it's time for Moose to get serious about, um, souvenir-shopping. She found a picture online of the sculpture she came across last weekend while touring artists' studios in a little town south of her undisclosed location. We're putting the photo in without attribution or a link because we have a question about the sculpture that we'd like to put to you, our loyal, sophisticated, and unflinchingly honest readers, but we wouldn't want the artist to stumble across it and think we were being irreverent or disrespectful of her work, which we greatly admire. We are already concerned that we alienated the entire state of Illinois with our post the other day on the purge of administrators tainted by the big admissions brouhaha at the state's flagship university, so we want to tread lightly in order to avoiding offending the great Southwest. It's a big country, people, and we are desperate for readers. We don't want to pi$$ everybody off. 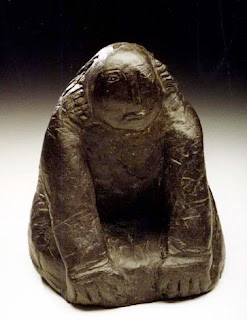 And here is the question:

In your opinion, does she look like "Woman Thinking" -- or, um, well, frankly speaking, and we're terribly sorry to put this so crudely, but do you think she might be more accurately described as "Woman Working Up a Poop?"

Now, mind you, the latter would not necessarily be an argument against Moose's purchasing her and bringing her home to Roxie's World. Indeed, some dear friends who have already been privately consulted on this important matter have suggested she would fit perfectly in one of the, um, salles de bain, as a kind of inspirational fetish, you know? Moose is still quite taken with her and was especially fond of the way she felt in her hands. Of the many lovely pieces on display in the studio, this was the one Moose felt compelled -- after asking permission, of course -- to pick up, to hold, to touch, to rub. To her, somehow, she wasn't so much an object as an invitation. Perhaps that is why the Thinking Woman -- whatever she might be thinking about -- keeps returning to Moose's thoughts. Especially now that the heater here at home has been fixed for a reasonable price.

So, weigh in, all ye connoisseurs of art and scatological jokes. What would you call this pretty hunk of bronze, and do you think Moose should bring her back to Roxie's World? The clock is ticking, darlings, so answer soon. Art is timeless, but sooner or later a girl's got to answer the call of the road home.
Posted by Roxie Smith Lindemann at 2:39 PM

Email ThisBlogThis!Share to TwitterShare to FacebookShare to Pinterest
Labels: eye candy, moose on the loose