A Note on Prizes, Marches, and Other Amazing Things

(With apologies to Homi K. Bhabha) 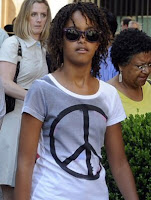 I know you are all dying to hear the official reaction from Roxie's World to the news this morning that President Barack Obama has been awarded the Nobel Peace Prize. We give a hearty PAWS UP to presidential daughter Malia Obama (shown at right in the lovely tee-shirt she wore in Rome this past summer), who burst into the First Boudoir and said, "Daddy, you won the Nobel Peace Prize, and it is [First Dog] Bo's birthday." Which was quickly followed by this helpful reminder from younger sister Sasha: "Plus, we have a three-day weekend coming up." To his credit, the president offered this charming episode of Kids Say the Darndest Things in the context of a statement acknowledging the award that was appropriately humble and focused on it as "a call to action, a call for all nations to confront the common challenges of the 21st century." We are also inclined to agree with the president's assertion that, "I do not feel that I deserve to be in the company of so many of the transformative figures who've been honored by this prize, men and women who've inspired me and inspired the entire world through their courageous pursuit of peace," but that might sound snarky, so we'll just offer the most sincere statement we can about today's stunning news, which is, of course:

HAPPY BIRTHDAY, BO!
Speaking of signs, here is the one the moms won't be carrying in the (possibly not so) Big Gay March on Washington this weekend: 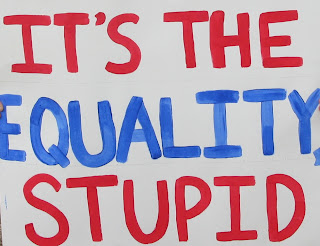 Y'all know the moms love nothing better than having a chance to march through the streets of the nation's capital with a bunch of clever, ornery rabble-rousers in support of one worthy cause or another. They have two perfectly valid excuses for missing this weekend's festivities: Moose is, as you know, 1877 miles away from home at the moment, and Goose, poor girl, has managed to come down with one of her horrible colds. She has been ordered to bed for the weekend, except for one swelegant, pressing social engagement our beloved Candy Man will be hosting Saturday evening. (Moose will be there in spirit and perhaps in Skype, though she regrets that virtual hors d'oeuvres are not nearly as tasty as actual ones.)

The truth, though, is that even if they didn't have two perfectly valid excuses for missing this weekend's march, the moms would in all likelihood opt out of the festivities. If you are going, we applaud your commitment and hope you have a wonderful time. If you see Lady Gaga, please give her our regards. We are grateful for the hoopla surrounding the march for finally inspiring us to click around and figure out exactly who the hell this Lady Gaga person is, so there is one small if unintended victory to celebrate. (We never claimed to be cool, kids.) As for the rest of it, well, we are inclined to agree with those who think that this march, planned in the wake of the devastating loss on California's Prop 8, is at best fuzzy in its aims and at worst a deflection of energy and resources from local battles desperately in need of both right now. Organizer Cleve Jones is calling for an end to the strategy of seeking incremental change on LGBT rights -- but the night before the march, the king of saying much and doing almost nothing in support of advancing those rights, President Barack Obama, will speak at the HRC's big-ticket annual dinner. No matter what happens in the streets on Sunday, the weekend's big gay story will be that the president stood before (a well-heeled segment of) the LGBT community and (yet again) expressed his (unrealized) commitment to equality. (Roxie's World will have a couple of well-dressed pals in the swanky hall Saturday night. We are counting on Julie and Kim for some inside scoop!)

As political actions go, for all their logistical challenges, marches are easy. They afford a certain amount of visibility, and they make the marchers feel good. The opportunity to stand shoulder to shoulder with a large, enthusiastic group of fellow travelers on the road to justice is energizing and inspiring. We don't discount the value of such outcomes, but our greater concern right now is with those who are feeling left out of the parade and with deeper issues of goals, strategies, and leadership that won't be solved by a march or a rally or a rubber-chicken banquet.

We love us some well-painted signs, kids, and we are suckers for a pretty speech, but don't get fooled into taking them for political wonders. Peace out, and enjoy your weekend, however you choose to spend it.
Posted by Roxie Smith Lindemann at 12:14 PM