Wa Po has a pretty good story today by Dana Hedgpeth on the tireless efforts of Michigan Governor Jennifer Granholm (D) to bring jobs to the state with the nation's highest unemployment rate (15.2%). We totally heart this sharp-as-a-tack power chick and will probably quit our day jobs and go to law school if she ever ends up on the Supreme Court just so we can vie to be one of her love slaves/law clerks. We are trying to make up our minds, though, about the photo and caption Wa Po used to illustrate the story. Study them carefully, kids. There will be a quiz: 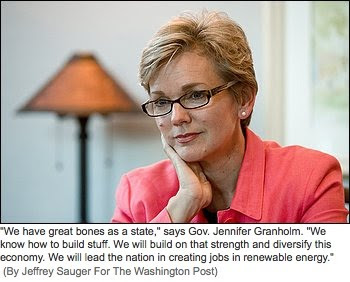 The photo is great, of course, and highly flattering to the gov, whom both supporters and detractors call "Jenny the cheerleader," "because of her relentless optimism," according to the story. (Do you really think she got that moniker just because of her optimism, kids? Nah, us neither.) (Granholm prefers to call herself a "zealot.") And Granholm obviously spoke the words used to caption the photo, offering up a pithy compliment to her state's "great bones" and its ability to "build stuff."

Here's what has us scratching our noggins: Is the caption good or bad? Is it a net positive in that it shows a woman leader with the confidence to draw unselfconsciously from two highly gendered image repositories -- i.e., the "female" world of beauty and bone structure and the "male" world of building and other hard "stuff"? Or does it subtly undermine Granholm's credibility as leader of a state reeling from the collapse of the auto industry? Will "good bones" make Michigan competitive in a new economy of high-skilled, environmentally friendly jobs? Or does the beauty-pageant language suggest that the girl gov, who tears up in her office when recalling her failed efforts to convince appliance maker Electrolux to stay in the state, isn't up to the job of bringing jobs to Michigan? Read the story, and tell us what you think.

The Chronicle of Higher Ed has a brief piece today on a study published by the Wellesley Centers for Women on the disparity in the price of tickets for women's basketball games in comparison to men's games, even on campuses, like the University of Connecticut, where the women's team has a rock 'em, sock 'em record of success (6 NCAA championships, according to the bitter QTU fans of Roxie's World). The study, "Ticket Office Sexism: The Gender Gap in Pricing for NCAA Division I Basketball" by Laura Pappano and Allison J. Tracy (available for purchase on the Wellesley Centers for Women Web site), argues, as its title suggests, that the pricing disparity is a form of discrimination, a sign that women are still de-valued in the traditionally male world of sport. The study argues that the claim that lower ticket prices for women's games are necessary to boost attendance doesn't hold up, because the disparity persists even at schools like Connecticut that have a strong fan base for their women's team.

As you can imagine, this is a story that captured the attention of the feminazi b'ball freaks of Roxie's World, but, surprisingly, our knees didn't reflexively kick out in anger over clear evidence of institutional sexism. As season ticket holders for both men's and women's basketball at QTU, we can tell you there is a significant -- indeed, astronomical -- disparity in pricing right here in our own backyard, although the women's team has a much greater record of accomplishment over the past several seasons as well as some mighty impressive attendance records (which my typist cannot lay her fingers on at the moment, alas). Still, the women don't consistently pack the Comcast Center in the way that the men's team does, even when the non-Lady Terps manage to lose, as they did last season, to the likes of Morgan State. Moreover, sensitive as we are to any sign of gender inequity, we have to admit that we enjoy seeing the Comcast Center filled with screaming kids cheering on the women as they school their opponents in lightning-fast offense. The more affordable pricing structure makes the women's game accessible to those younger fans, who giddily celebrate their birthdays up in suites occupied by corporate fat-cats during the men's games. We don't want to deny revenue to the women's team, but we don't want to deny them crucial opportunities to build their fan base either. And, frankly, we just love the vibe the Comcast Center has during the women's games. Even when the dreaded Dukies are in the house, it's a fun, friendly, happy place to be, and that is by no means always the case when the non-Ladies take the court. Jack up ticket prices, and you run the risk of turning the women's game into what the men's game has become: a grim, money-grubbing diva dance in which every player has his eye on the best deal he can get for himself in the NBA rather than on what's best for the team. It ain't pretty, and a lot of the time it's damn near excruciating to watch.

Wait a minute, kids -- Did Roxie's World just say that sometimes gender inequity is good? WTF? Jump in here and tell us how wrong we are, folks. I think perhaps the high altitude has gone to my typist's head! Peace out and remember: the Lady Terps kick off their 2009-10 season at home against Bowie State at 7 PM on Nov. 4. Moose will be (barely) back from her undisclosed location by then. Where will you be, sports fans? It's the most affordable game in town -- and one of the most exciting!
Posted by Roxie Smith Lindemann at 3:29 PM