In Praise of Peaches

A Food Rhapsody, With Some Modest Reflections on the Culinary History of the United States (of Moose and Goose)

Prelude: This post follows up in some ways on our review the other day of the new Nora Ephron film, Julie & Julia, starring Meryl Streep and Amy Adams and based on Julia Child's memoir of her years in France and Julie Powell's memoir (which has the same name as the film) about cooking and blogging her way through all 524 recipes of Child's Mastering the Art of French Cooking. (That post, by the way, has brought more than 700 readers to Roxie's World in the past two days, smashing all previous traffic records to smithereens. Thanks for visiting, everybody, and thanks again to Shakesville for putting us in a "Blogaround.") The post also cogitates on issues raised in two wonderful posts and discussion threads over at the always fascinating Historiann. In advance of the release of Julie & Julia, Historiann took issue with a history of American cuisine that sees everything as before and after Julia, perhaps giving too much credit to Child for transforming American taste and foodways. The posts are here and here. Go read them. Food will never look the same once you've seen how Historiann and her history geek squad look at it. 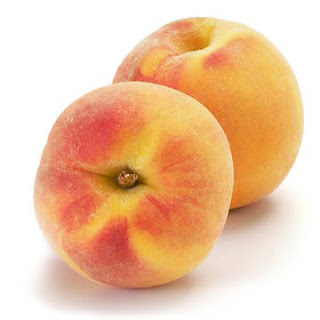 Do I dare to eat a peach? Why, yes, I do -- Well, or, the moms do. Many, in fact, over the course of the long, bounteous, stay-at-home-to-save-money-and-see-if-the-dog-is-going-to-die summer of 2009. Moose returns from the farmer's market every Sunday loaded down with the most luscious yellow red orbs of glory on dog's earth, and she has spent much of the summer trying to make sure that all of one week's peaches get eaten before the next week's supply arrives. And so the moms have had peaches on breakfast cereal, peaches with ice cream, cute little donut peaches with truffles, peaches with nothing at all, and finally -- inevitably, and accompanied by vocalizations that recall Meg Ryan's famous scene in When Harry Met Sally -- peach cobbler, made from the recipe in The Silver Palate Cookbook.

The Silver Palate, by Julee Rosso and Sheila Lukins, came out in 1982. The moms think of it (and, to a lesser extent, its sequel, The Silver Palate Good Times Cookbook, published in 1985) as having taught them how English profs and other cool cultural types ought to cook and live. They got together in 1984, and The Silver Palate was an essential part of their transition from starving grad students who had grown up in the provinces to the high falutin' Eastern sophisticates they are today. (I am certain that those who know the moms in the real world will rush to verify the truth of that statement in comments. Right? Hell0000000? Anybody there?) The moms had separately learned to be perfectly respectable cooks in the course of their Texas (Goose) and Indiana (Moose) girlhoods. Goose had earned her stripes as a saucier by making a flawless white sauce in a home economics class she was forced to take at a religious college she was forced briefly to attend. Moose had discovered her knack for culinary resourcefulness when she cooked her first Thanksgiving dinner in a basement apartment so small and dark she could barely see the cans of sweet potatoes her mother had mailed to her (which was just one of the reasons she didn't end up serving them).

Interestingly, neither of the moms can credit Julia Child for much of their early culinary education, though Goose recalls watching repeats of The French Chef late at night in her early years of grad school. Irma and Marion Rombauer's The Joy of Cooking was the Bible of the mother of the Goosians, while Moose's childhood kitchen relied on the red-and-white checked Better Homes and Gardens Cookbook. Both households also had an assortment of local cookbooks, mostly published by churches or women's civic organizations. The moms' cookbook collection still contains volumes produced by the junior leagues of Houston and San Angelo, Texas and Kalamazoo, Michigan. Indeed, when Moose feels like shocking snooty friends, she'll whip up a batch of spinach balls from the I've Got a Cook in Kalamazoo cookbook, and wait until the guests are oohing and aahing over them to reveal the source of the recipe. Their stories underscore a point made in Historiann's discussions on the topic of Child's influence over American cooks -- i.e., that it was inflected by both class and geography. The San Angelo junior league's cookbook opens with a preface noting that "On a cattle drive . . . the most important person in the world to the average cowboy was the cook." You get the impression the cowboy wasn't looking to tuck into a Boeuf à la Bourguignonne at the end of a long day on the range, and the junior league's collection of recipes reflected that regional history.

In any case, if the moms were decent cooks by the mid-80s, The Silver Palate helped to make them more adventurous and ambitious ones. They still recall the Thanksgiving of 1987, when the parents of the Moosians and the Goosians were brought together for the first (and, as it turned out, the only) time -- and were treated to a menu that included purées of broccoli and sweet potatoes with carrots instead of the usual side dishes. Moose thinks of this as the Crème Fraiche stage of her life as a cook, which didn't last long, but she still consults The Silver Palate every year for holiday menu ideas and still relies on a variation of its recipe for roasted turkey. There are a few other recipes that have become household staples, including "Our Favorite Vinaigrette" and a rich green lasagna that is the most delectable argument for vegetarianism we have ever eaten. But still, the recipe that takes us back to The Silver Palate season after season, the page we lovingly marked with a torn-out recipe for a lemon tart we never got around to making, the reason, we are sure, that God invented peaches, is the recipe for peach cobbler that appears on p. 308.

Here is the recipe:

4. While peaches are baking, sift flour, 1 tablespoon of the remaining sugar, the baking powder, and salt together into a bowl. Cut in shortening until mixture resembles cornmeal. Combine beaten egg and milk and mix into dry ingredients until just combined.

5. Remove peaches from oven and quickly drop dough by large spoonfuls over surface. Sprinkle with remaining 2 tablespoons sugar. Return to the oven for 15 to 20 minutes, until top is firm and golden brown.

The photo below shows Moose's most recent iteration of this perfect recipe, which she has dared to tamper with by adding a few blackberries. (Moose has gone rogue as a cook this summer, after decades of slavish fidelity to recipes. We don't know how to explain this shocking transformation, but so far the results have been delicious.) Voila le cobbler: 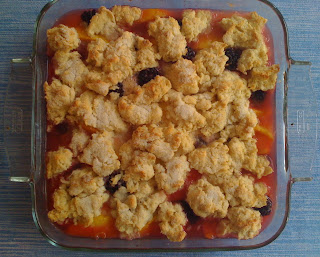 (Cooked, styled, and photographed by Moose. Hell, she even bought the peaches.)

Go. Make. Eat. Have your own food-induced orgasm. Then come back here and tell us stories about your culinary education. We'd be especially interested to hear from some kids who actually did have East Coast upbringings. Was Julia Child a big influence on the cooking done in your home? Also, for our pretty boys who are such excellent cooks: We are fully aware of how gendered the whole business of a culinary education is. Learning to cook was a huge part of growing up female for the women of Moose and Goose's generation. We'd love to hear when and how men obtained such knowledge and how they experienced it as a part of growing up (queer?). So go eat and then get back to us, you hungry hounds. Bone Appétit encore, mes amis!
Posted by Roxie Smith Lindemann at 2:17 PM