The Presence of Compassion?

And then there were none -- 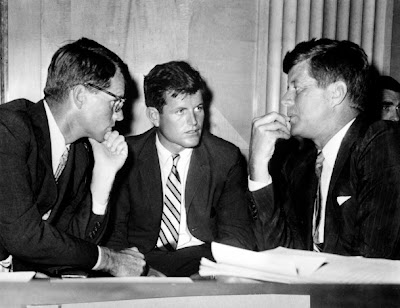 Senator Edward M. Kennedy, you may have heard, has died. Let the exploitation of his and his family's legacy begin.

(NB: Roxie's World sincerely mourns Sen. Kennedy's passing, but that isn't really what this post is about. If you need to immerse yourself in the first efforts to plumb the meanings of his life and death, his triumphs and his tragedies, then go here, here, or here. Ready for an honest, warts-and-all assessment from a feminist perspective? Go here or here.)

As we were saying, the (brazen, cynical, fauxgressive) exploitation of Kennedy's legacy didn't take long. Local case in point:

At 1:12 this afternoon, Moose received an e-mail from Maryland Governor Martin O'Malley, himself a telegenic Irish pol with large ambitions, honoring the late senator as "a great champion of progress." O'Malley invoked the Irish poet John O'Donohue, who, says the gov, "taught us that the most powerful type of presence that any person can bring to this world is the presence of compassion." Kennedy, he notes, no doubt with a tear in his Irish eye, "had that presence of compassion." So, he seems to imply, does Martin O'Malley: "Senator Kennedy believed that each of us can make a difference in this world. By carrying forward his compassionate spirit and his causes, we can honor that belief -- and all he did in his own life to make a difference."

Incredibly, just nine minutes earlier, Moose received another message from Gov. O'Malley announcing that the state's Board of Public Works had approved his plan for $454 million in budget cuts, cuts that will be achieved in part through layoffs and furloughs -- of up to 10 days -- for most of the state's 70,000 employees and "slash more than $210 million in funding for road maintenance, health care, community colleges and police funding in Baltimore and the 23 counties," according to the Baltimore Sun.

Furloughs of up to 10 days -- for a work force of 70,000 -- in a state with more than 5.6 million residents. "We are all in this together," Gov. Compassion claims in his chirpy message about the cuts, in which he invokes the specious analogy between family budgets and government budgets ("Just as our families have had to find a way to do more with less," blah de blah de blah) and touts his administration's progress in increasing the efficiency of state agencies.

We are all in this together? 'Scuse me, Gov, but what are the 5+ million citizens of Maryland who are not state employees contributing to the cause of budget reduction? Where is their sacrifice? I mean, sure, they'll get to drive on the crappy roads that aren't being fixed, and they will likely face tuition increases at community colleges (though probably not at Queer the Turtle U, since you seem determined to keep a tuition freeze in place until after next year's election). They might face a few minor inconveniences and perhaps some decline in the overall quality of life (expect rising crime rates and some difficulty managing the coming Swine flu pandemic, for example), but state employees will have money literally picked from their pockets. Thousands of dollars in some cases. Um, in our cases, actually. (The English profs of Roxie's World have already endured one costly round of furloughs, you may recall.)

I am sorry, Gov. O'Malley and fellow citizens, but state employees find it hard to detect "the presence of compassion" in this plan. And, please, don't tell us that furloughs are better than permanent salary reductions or broader layoffs. That is true but beside the point. If the state is in a revenue crisis because of the recession -- and obviously it is -- then the state should find a way to raise emergency revenue in order to fulfill its obligations to its employees and all its citizens. If "we are all in this together," then all of us should be called upon to share in the sacrifices necessary to weather the storm. Instead, a handful of citizens is being asked to shoulder a disproportionate share of the burden because a Democratic governor with one of the most heavily Democratic state legislatures in the country doesn't have the political guts to call for a tax hike to help get the state through the deepest recession since the Great Depression.

A profile in courage, you are not, Gov. O'Malley. And neither are you, President Obama, even if Ted Kennedy did personally hand you the mantle of Camelot in the past election. Don't think you can walk away from the public option for the sake of a deal -- any deal -- and pretend that you have fulfilled Kennedy's dream of health care for all. Don't think you can put lipstick on the pig of a weaselly health insurance reform bill by naming it after Kennedy and fool us into believing you've really accomplished anything. That is not "the presence of compassion," Mr. President. That is the absence of compassion and the triumph of cynicism, and if that's what we end up with the ornery old bitches of Roxie's World will call you out on it, loud and clear.

The dream may never die, Ted, but tonight it feels as if it's on life support. We need leaders whose actions match their rhetoric. From time to time in the course of your epic life and career you managed to achieve that elusive balance. We'll play you off with the sound of your own beautiful voice paying tribute to your fallen brother Robert and the truly democratic values he gave his life fighting to realize. Godspeed, Senator. May you sail on tranquil seas to a place beyond pain and sorrow.

(H/T to my Aunt Margie, fighter for justice, who passed this vid along earlier today.)
Posted by Roxie Smith Lindemann at 9:51 PM