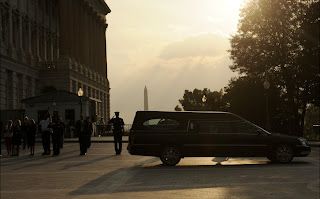 Admit it: When you go, you want to go like a Kennedy, don’t you? I mean, really, does anybody put on a funeral like the Kennedys do? Shouldn’t we just anoint them the First Family of American Death and be done with it? And, seriously, if Ted Kennedy had to pack it in, isn’t there something swell about his getting to be the grand finale in the summer of 2009’s Cavalcade of Dying Stars?

The mother of the Moosians, a lifelong Republican, seems to think the Kennedys are worth emulating in this respect. She sent her children an e-mail on Saturday, during the mid-day break in Day 3 of Ted’s Deathapalooza, making it clear that she, too, expects to be sent off into eternity with a full-on spectacle of eloquence and elegance. The part of Yo Yo Ma is to be played by the Older Sister of the Moosians; that of Placido Domingo to be played by the Younger. Moose and her brother are charged with crafting eulogies that will make the audience laugh, cry, and resolve to be nobler, nicer people, regardless of party affiliation, sexual orientation, or gender identity.

Perhaps now you see where Moose gets her tendency toward morbidness as well as her skill in event planning. Moose is already racking her brain trying to come up with some inspirational Midwestern substitute for all those sailing metaphors the Kennedy eulogists are constantly invoking. Not that her mom is planning to check out anytime soon, but, hey, a girl’s got to plan ahead if she’s going to turn that wrist she broke in a first-grade roller-skating accident into the heart-warming story of a child saved by a mother’s unwavering faith and love. Well, her mom did drive her to the doctor. And she probably told her that having a cast on her writing hand was no excuse for not doing her homework for four weeks. You’ll finish that assignment if it takes you all day, she probably thundered, over encouraging plates of Rice Krispies Treats.

Anyway, there’s been a lot of speculation in the past few days about whether Ted’s passing signals the end of an era in politics, the end of particular formations of Irish-American familyness, or the end of the Kennedy clan’s unique hold on the American imagination. The aging bitches of Roxie’s World fervently hope that none of these end games plays out. We do hereby call upon the younger generations of Kennedys to step up to the plate and make themselves larger than life so that they can go right on being, you know, larger than death. Why?

We need a steady supply of Kennedys to continue the vital pedagogical work of teaching Americans how to act, speak, and feel in public when the Grim Reaper comes to call. Even President Obama seems to have needed a little guidance from the experts in the house at Boston’s Our Lady of Perpetual Help Basilica, or so we surmise from this photo of him looking over at Kennedy’s widow Victoria Reggie Kennedy and his son Teddy Jr. during the funeral mass: 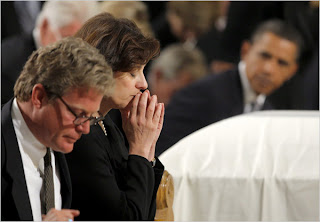 (By the way, we totally approved of the prez’s low-key eulogy for Senator Kennedy. We thought its plainness was lovely and that it conveyed a genuine, appropriate humility toward a man whose claim upon history is likely to be nearly as large Obama’s own.)

The Department of Affect Management here in Roxie’s World is concerned that you may miss the serious point of this post, obscured as it by our death-defying snarky tone, so let me pause for a moment to say it to you plain:

For nearly half a century, the Kennedy family’s tragedies have played out on the most public of stages. Those of us who have been watching have seen the blood on their clothes, the anguish in their eyes, the consoling arm extended toward a widow or a child. We have heard their voices choked off by sorrow and rising up in sublime poetry. Through them we have witnessed the horror of death but also its pageantry: the slow procession of mourners in the street, the solemn gesture of a little boy acknowledging his father’s coffin, the gentle swinging of the censer, the precise folding of a flag, the fading notes of a bugle as day gives way to night.

Of course we don’t mean to suggest that any lesson any of us might have learned from the family’s terrible losses can mitigate or justify the Kennedys’ pain. The powerful examples they have afforded us of giving death its due and finding ways to go on embracing life are just one more public service this extraordinary family – for all its flaws and with all its privileges – has performed for a fascinated nation. In hoping Teddy’s end does not spell the end of his family's role in public life, we mean only to express gratitude and our faith that those he leaves behind will devote themselves to the unfinished work of realizing the undying dream he helped us all to glimpse – in their own time and in the manner that feels appropriate to them.

That is all, darlings. You may now return to your regularly scheduled snarking. Peace out.
Posted by Roxie Smith Lindemann at 12:20 AM