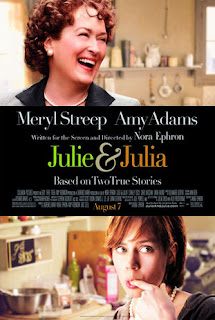 Y'all might have expected that the moms would have been first in line Friday to catch the opening of Nora Ephron's new flick, Julie & Julia, at the glorious AFI Silver Theatre. It is, after all, an estrogen-fueled, butter-enriched spectacle of female ambition and ingenuity anchored by Meryl Streep as the indomitable Julia Child. This time last year, when Mama Mia! was released, Goose declared on this very blog that she "could watch Meryl Streep playing poop on toast and be utterly mesmerized. And happy." Moose concurred in that judgment. So, yeah, it's a safe bet they'll knock off early on a summer afternoon to see whether Ephron has whipped up a fine soufflé or a flat, hot mess in linking the story of Child's rise to greatness as a translator of French cuisine for American cooks with the story of Julie Powell, a young writer who achieved quick fame by spending a year cooking her way through Child's Mastering the Art of French Cooking -- and blogging about it. The blog caught on, became a book, and the book, with Ephron's significant contribution as screenwriter and director, became a film. So?

Short answer: Julie & Julia is delightful. Streep is, as always, superb and riveting. She beautifully conveys the energy, the joie de vivre, and the physical presence of the 6'3" Child without seeming to strain or ever slipping into parody. (She comes close, especially in mimicking Child's lilting voice, but one could argue that Child herself came close to parody, once she came into her own on television.) The supporting cast is uniformly terrific, especially Stanley Tucci as Child's adoring husband Paul, a diplomat whose career fortuitously took the couple to France in 1948. Jane Lynch makes a brief, wonderful appearance as Child's sister Dorothy, which gives viewers a sense of the stuffy provincial world Child escaped when she left Pasadena to attend Smith College in the early 30s.

In the Julie plot, Amy Adams plays a character who is, as Child herself was before she started studying at Le Cordon Bleu, a young woman adrift and insecure who finds herself in the discipline of cooking. In the beginning of the story, Julie is smart but unfocused. She is a writer with an unfinished novel stuck in a job she hates. One can't help but be charmed by the determination and chutzpah that emerge through her passionate engagement not only with Child's cookbook but with the person(a) of Child, who becomes an imaginary friend and mentor as she plows her way through the 524 recipes. Julie, too, has an adoring spouse, Eric, winningly played by Chris Messina, who encourages Julie through the inevitable culinary disasters and disappointments that occur along the way. Most devastating is the news, which Julie receives late in the film, when her blog has catapulted her onto the pages of the New York Times, that Child herself disapproved of The Julie/Julia Project. Eric bolsters her shaken confidence, reminding Julie that what really matters is the Julia she has conjured for and within herself.

This detail, about Child's snooty dismissal of Powell's project, is apparently true and has been circulated by Judith Jones, Child's editor at Alfred Knopf. In response to suggestions that Child thought Powell was disrespectful or exploitative, Nora Ephron has diplomatically remarked that she believes if Child had lived longer (she died in 2004, a year after Powell's blog project ended), she would have come to recognize that Powell "was popularizing and paying homage to her." Some of the film's critics, though generally kind to Julie & Julia, have taken a position closer to Child's than Ephron's and dismissed the Julie half of the film as wan, insipid, and overwhelmed by the Julia half. A. O. Scott in the Times blames the imbalance on a flaw in the film's premise: "Julie is an insecure, enterprising young woman who found a gimmick and scored a book contract. Julia is a figure of such imposing cultural stature that her pots and pans are displayed at the Smithsonian." Ann Hornaday in WaPo is even tougher on Julie, arguing that she is a whiny sad-sack whose cooking is only another sign of her self-absorption. "As for Powell," Hornaday sniffs at the end of her review, "her project resulted in everything she wanted in the first place: fame, a book contract and a movie deal. That's it. No matter how strenuously Ephron tries to draw parallels between her protagonists' friendships, marriages, struggles and triumphs, it's no use. In pure style and strength of character, Child reigns supreme. And Powell's arms are too short to blog with God."

The blogging bitches of Roxie's World are here to tell you that such readings of Julie & Julia are as wrong as margarine, nonstick cookware, and frozen TV dinners. Moreover, they smack of ageism, elitism, don't-touch-the-hem-of-the-iconism, and the print journalist's fear and loathing of anything that has its origins in the blogosphere. We haven't read Julie Powell's original blog (you can check out her current one here) or the book that grew out of it (though it is on order, for research purposes). We are grateful, however, that the writerly fantasy that impels Ephron's film is far more generous to Powell than critics like Scott and Hornaday have been. The film doesn't have to convince viewers that Julie Powell is destined for the kind of greatness Julia Child achieved in order for us to root for the young writer/cook and accept the intertwining of the two women's stories. All it has to do is get us to see the brilliance of Powell's conceit for her blog and the strenuous discipline that was required to follow through on the commitment she made to herself and her growing group of readers.

In this, in our judgment, the film entirely succeeds. Granted we have our own biases in favor of the struggling solo blogger, quietly tapping the keys in the still of the night, wondering who, if anyone, is reading, enduring the condescension of friends and the cluelessness of family (hilariously depicted in Julie & Julia in a series of phone conversations between Julie and her mother, who is voiced by Mary Kay Place), and finally hitting the jackpot of public success. (Where, oh where, is the literary agent who will recognize the billions of dollars waiting to be made off America's favorite dog blog devoted to politics, pop culture, and basketball? Sigh.)

Mastering the Art of French Cooking was a monumental feat of writing -- a work of scholarship, an act of translation that mattered tremendously to a generation of American cooks. If Julie & Julia -- as blog, book, and film -- reconnects us to that history and introduces Child to another generation of cooks, then it is worthy of our applause, not our contempt. Michael Cunningham offered a similar act of homage for Virgina Woolf in his 2000 novel, The Hours, and earned both a Pulitzer Prize and another film starring Meryl Streep for his efforts. We don't need to imagine that Powell's laptop will end up in the Smithsonian in order to appreciate what she launched when she bravely pressed "publish" for the first time. We just need to recognize that youth must begin somewhere and that the present is always reinventing the past. Thank dog Nora Ephron figured that out and conveys such an appreciation in every frame of this deftly constructed, deeply generous, utterly absorbing film.

Go see Julie & Julia. Roxie's World gives it an enthusiastic Five-Paw Rating, with a couple pats of butter on the side for good measure. And because the immature dudes in our Department of Exceptionally Bad Puns insisted, we will sign off with our own unique homage to Julia Child. Yep, you knew it was coming: Bone Appétit!
Posted by Roxie Smith Lindemann at 2:46 PM