Question of the Day (or, Technically, Question of the Extremely Early Morning, On Account of My Typist and I Have Given Up Sleeping at Night, It Seems):

How do you sign off your e-mails?
Related and more to the point:

How do you negotiate the often mixed nature of your relationships (professional and personal) in the also mixed and constantly shifting mode of e-mail?
By “mixed,” we mean that e-mail has always been a hybrid mode of communication – kinda (or sometimes) formal and kinda (or often) informal; a little bit like letters, a little bit like memos; a way of conducting official business, a primary means of reaching out and touching everyone in nearly aspect of our lives. Sometimes all in the same message. By “shifting,” we mean that e-mail has evolved in the last decade or so as it has taken over our communications lives and as other platforms (such as texting and Twittering) have emerged and influenced its style and grammar.

Why does this question pop out in the middle of the night as the lassitude of August takes hold of Roxie’s World and other places in the northern hemisphere? WaPo ran a story yesterday, a very August kind of story, the kind that runs when Congress and all the Villagers are fleeing the city to be liberated from even having to pretend to know what to do about health care, climate change, or Afghanistan. It was kind of an etiquette story on how vexing it can be to figure out how to sign off an e-mail message, given that e-mail, unlike earlier epistolary modes, doesn’t come equipped with “time-tested formal guidance on the correct way to sign off.” And so we sit in our cubicles torturing ourselves as to whether “best” conveys sufficient warmth or “XOXO” conveys an embarrassing excess of it. We wear out our backspace keys and waste billions of dollars in person hours trying to figure out whether and how to say good-bye.

Goodness, people, you really don’t want to think about Afghanistan, do you? 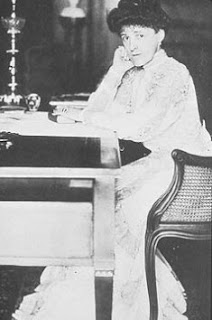 My typist, who grapples with the mind-boggling dilemma of how to close an e-mail dozens of times a day, would like to point out that it might not have been that much easier in the olden days of letter-writing. Despite all those conduct books and established rules of epistolary etiquette, a girl could find herself caught up on the horns of precisely this dilemma. One of Moose’s favorite moments in all of Western literature occurs early in Edith Wharton’s The Custom of the Country (1913), when Undine Spragg, a spectacularly ambitious social climber trying to penetrate the impenetrable social world of Old New York, wrestles with how to close a response to a dinner invitation from one of the elite. Writing as her mother, to whom the invitation is addressed, Undine labors over her pigeon-blood notepaper with white ink, trying to decide how to close out her reply. The letter of invitation had been signed simply, “Laura Fairford,” but Undine thinks that seems schoolgirlish and beneath her mother. She first signs her reply with a dignified, “Sincerely, Mrs. Abner E. Spragg,” but then caves into insecurity and copies the formula used by her would-be hostess, “Yours sincerely, Leota B. Spragg.” It gets better:

But this struck her as an odd juxtaposition of formality and freedom, and she made a third attempt: “Yours with love, Leota B. Spragg.” This, however, seemed excessive, as the ladies had never met; and after several other experiments she finally decided on a compromise, and ended the note: “Yours sincerely, Mrs. Leota B. Spragg.” That might be conventional, Undine reflected, but it was certainly correct.

Moose regrets that the computer age has tragically reduced the demand for pigeon-blood notepaper with white ink, but she is pleased to realize that Undine Spragg remains a heroine for our manner-impaired time.

Back to the article, though. Unfortunately, it isn’t likely to rescue many latter-day Undines from the social challenge of how to make a graceful e-mail exit, since the piece is entirely anecdotal and full of contradictory advice from people who seem as puzzled by the whole matter as the baffled barbarian ensconced in her suite at the Hotel Stentorian. The article cites a book on the etiquette of e-mail by a couple of guys who advocate “best” as a safe, all-purpose close, but it also notes a (non-random and therefore probably useless) poll indicating that 25% of participants “close their professional e-mails with ‘Sincerely,’ while 20 percent use some variant of ‘Thank you,’ and 17 percent use no closing at all. ‘Love’ is the most common personal e-mail closing, followed by no closing.”

To which Moose replied, “On what planet was this poll taken?” Moose would only use “sincerely” to close a letter of recommendation she was sending by e-mail because she had missed the deadline and was begging some admissions committee to let her student into grad school anyway. She rarely uses “love” in e-mail, not even to Goose or to her aging mother, because it just seems too warm for the cool medium. Family and close friends get an “xo” (not an “XO” because Moose, as her regular correspondents know, isn’t big on capital letters in e-mail), though she is fond of “fondly” and “take care” and “hugs,” depending on her mood, the occasion, and the overall tone of the missive. With certain very special correspondents, her messages are written in a (she thinks) wickedly funny camp mode and sprinkled with bad French and vulgar innuendos. Such messages might conclude with declarations of undying love or cheesy song references.

For messages that are strictly business, Moose is a “best” girl all the way, “all best” if the occasion is formal or the correspondent not well known to her. One of the co-authors of Send: Why People Email So Badly and How to Do It Better adds oomph to “best” by following it with an exclamation mark, but Moose frowns on promiscuous uses of exclamation marks in business communication. She’ll close with “thanks” if the exchange is a request for assistance or information. She finds it physically painful to close a message without a closing and believes doing so is a crime that deserves a trip to Gitmo. But “sincerely”? Srsly? When was the last time you closed a message with “sincerely” and intended to convey anything other than, “You are an insufferable ass, but you have power over me and so I am going to pretend to defer to you?” Is this a cultural difference between academic and corporate work places, the difference between a collegial model of work and a more hierarchical one? Or is it just the fluke of a bad poll? Most of the folks featured in the story, including Arianna Huffington, weren’t big on “sincerely,” though Moose was surprised by the fondness for “XOXO” among younger professional women, including MSNBC’s Norah O’Donnell. (Really, wimmin? You don’t think that second “XO” undermines your seriousness in other people’s eyes?)

What’s the custom of your country, kids? Now that you’ve reluctantly abandoned your pigeon-blood notepaper and moved away from fabulous names like “Leota” and “Undine,” how are you handling these delicate social/professional questions? Are you a “best” boy? A “love” muffin? Or are you one of the cool kids with one of those quirky sign-offs that is supposed to reveal your hipness and originality but in fact proves that you are an immature loser who spends way too much time trying to figure out what's cool? “That’s me yo.” Of course it is, dear.

Thanks in advance for your attention to our question. We look forward to hearing from you soon.

Posted by Roxie Smith Lindemann at 7:04 AM