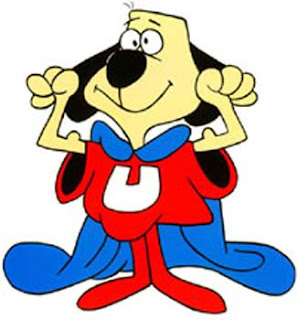 I believe I will, thank you -- die another day, if you don't mind.

(Post title offered without apology or further reference to this epic motion picture of 2002. But here is the image credit.)

It's been awhile since we updated you on the progress of my dying. In this long, corpse-strewn summer, when celebrities, dogs, celebrities' dogs, and celebrity dogs have been dropping like flies, America's favorite dog blogger devoted to politics, pop culture, and basketball, whose demise was confidently predicted for mid-June, endures. Indeed, the summer of 2009 has been such a deadly season that the Office of Death Commemoration here in Roxie's World, directed by the highly capable and experienced Emmeline Grangerford, has fallen behind in its work, failing to note the passing last week of Homer, a sweet shaggy beast of a fellow who succumbed to lymphoma. Ms. Grangerford extends apologies as well as sympathies to Homer's humans, Julie and Kim, who deserve a better poem than they are likely to get out of the overworked scribes of ODC right now. Fortunately, Julie knows that a good poem cannot be rushed. Our thoughts are with you, friends.

Back to me the living, the not yet dead, the mighty dog who looked the Grim Reaper right in the eye and said, "Put down that scythe, a$$hole. I ain't going anywhere!" How's that whole showdown going? you may be wondering.

Close readers -- and I know that you are all close, even professionally trained, readers! -- may have gathered that the Reaper seemed to have gained some momentum in our battle recently. I have continued to eat, drink, and poop normally, which is good because people keep telling the moms, "If she stops eating you'll know it's time." Their tones are so somber when they say this that I have a hunch that if I skip a meal it may be my last, so I greet the food bowl with great enthusiasm whenever it is presented to me. "No, no, Nurse Jackie," I imagine screaming, "it's not time for your special champagne cocktail!" In the past week or so, though, I have had some difficulties, including a high degree of what geriatric dog experts call "nocturnal restlessness." I am wakeful. I whine. I twirl, as the moms call my efforts to pull myself around on my front legs. Eventually, I bark, and I keep it up until a poor sleepy mom comes to check on me. At which point I stop. For awhile. One never knows for how long, and the torment of that uncertainty -- If I close my eyes will it start again? -- has kept at least one mom wide awake for much of the past week. Not good, kids. Hell hath no fury like a sleep-deprived Moose.

Yesterday, we decided to take action against the encroachments of the Reaper. The moms took me to my groomer. Don't laugh! Even a tough girl appreciates the restorative powers of a spa day, and I have to admit I was one scruffy pup before Marie laid her gentle yet masterful hands on me. I am pleased to report that the strenuous effort to make myself beautiful so wore me out that I slept through the night last night -- and so did Moose! Which means we were all bright and shiny this morning for phase 2 of our action plan, an appointment with the vet. We've avoided the vet this summer, since I've been on hospice care, but the moms felt we'd reached a point where we needed an assessment as well as some advice on how to handle my night-time Restless Dog Syndrome.

Happily, we were able to get an appointment not with the doctor who is known in these precincts as Kevorkavet (because she has twice proposed killing me) but with the doctor whom I have long considered to be my primary care physician. Let's call her Angel. Moose had prepared very carefully for the appointment and so was able to offer the doctor a precise account of everything that had happened since late May, when my cardiologist had put me on a new medication for my heart murmur. Condensed version: A week later, I was in liver failure. I had also by then lost the use of my back legs, which probably isn't related to the liver failure, but is nonetheless an important part of my health story. The moms decided not to subject me to further tests or heroic treatments and took me off all medications (I was on 7 at the time). Kevorkavet said I would probably die in two weeks without treatment. Here I am, biyatch.

Angel spent about 45 minutes with us. She was amazed at how well I was doing without medication. The moms beamed with pride at this declaration. Moose looked down at me and whispered, "El milagro." She does not speak Spanish, but for some reason she likes this particular endearment when I have done something that both moves and impresses her. The doctor understood and respected the moms' desire to let nature take its course and assured them there was no reason to consider doing anything else (i.e., KILLING ME!) at this point. She gave me a shot of B12, took a blood test, cleaned out my eyes, and sent us home with a bag of new things to try to keep the eye gunk at bay. She recommended going back on small, twice-daily doses of Tramadol to see if it would help me sleep better at night. If that doesn't work, we may try Benadryl. She hugged the moms and gave them her cell phone number. "She's not ready to go yet," she told them.

But, really, Angel, thanks a bunch for that cell phone number. We know some hot chicks down in the dog park who are going to be insanely jealous when we drop that little tidbit into conversation. And drop it we will, girlfriend. We are definitely not above that.

We'll sign off with a music vid for all the baby boomers, all the punk rockers, and all the crime fighters out there who are committed to righting wrongs with blinding speed. (Need to hear the original Underdog theme song? Go here.) Yeah, it's the Butthole Surfers rocking out to a mashup of clips from the classic cartoon of the early 60s. Watch it, kids, and know that you are the cape that lifts me into the air, the object of all my noble quests, the true-blue spectacle in every miracle I perform. Fight on, darlings, fight on. Tomorrow is another day -- and I'll be here to share it with you.