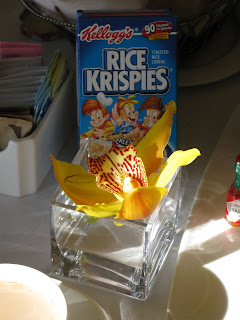 MLA Highlight Reel: The Good, the Bad, the Barfing

Meanwhile, here on the ground in San Francisco, the moms have enjoyed the usual mix of hard work, hob-nobbing, heavy drinking, and sleep deprivation that is the MLA. The fun has been a little more subdued this time around because Goose was hit by a nasty stomach bug that sidelined her for about 24 hours. It's hard to decide whether her most impressive accomplishment during the convention was tackling a terrified job candidate as she raced to a bathroom to barf and then returning to the lobby of the Hilton to schmooze as if nothing had happened or getting through two presentations on back-to-back sessions when she hadn't had a bite of food in two days. Or, wait, finding clever ways to use her new iPhone to promote her latest scholarly project. That Goose, she's a trooper and a marketing genius.

The professional highlight for Moose was having a front-row seat for the big smackdown between Stanley Fish and Judith Butler over Fish's provocative new book, Save the World on Your Own Time. (The Chronicle of Higher Ed has a report on the session, which also included Patricia Bizzell and Jonathan Culler, here.) Moose, being a keen observer of human behavior, was as fascinated by the spectacle of the session as by the substance of what anybody said, since what was said was a mostly unsurprising argument over what we mean by "the political" when we talk about politics in the classroom. For the record, Moose thinks Butler won that argument on points, because she thinks Fish, like most critics of political profs, sets up a straw man, some agenda-driven ideologue who uses the classroom as a space for recruitment to a cause. From her front-row seat, Moose had great fun watching the body language of the occasion. Fish and Butler sat next to each other on the dais -- the aging curmudgeon and the still youthful-looking theory diva. He looked out at the audience with bemusement as the other speakers took their politely delivered shots. She made occasional sidelong glances in his direction and looked out at the audience with a gaze that seemed serene or studiously non-reactive. Or both. Moose happened to be sitting with a friend who knows Butler, so when the session was over she was delighted to have a chance, at long last, to meet the Girl Who Upset the Apple Cart of Gender and discover that she is, in fact, an incredibly warm, down-to-earth person. How cool is that, kids?

The highlight for today is that the MLA is over and Goose woke up with some semblance of an appetite, declaring she wanted Corn Flakes for breakfast. As you may gather from the photo on this post, room service at the Mark Hopkins had only Rice Krispies to offer in the way of Cereals We Remember from Childhood and Long to Have When Our Tummies Are Recovering from Icky Disturbances, but she has eaten, and now it's time for the moms to hit the streets of one of the world's queerest, most fabulous cities. No, they can't get married, but they can sure as heck have some fun, and that's what they're going to do. Tomorrow: Off to the Sonoma Coast to ring in the new year on the mighty Pacific. Peace out.

PS: Blog pal Jon Swift has posted his round-up of Best Blog Posts of 2008 (Chosen by the Bloggers Themselves). Roxie's World is proud to have contributed to this venture, with our favorite political post of the year, "Hillary: A Valediction," which we wrote in early March when it appeared that Hillary Clinton might be driven from the primary race. We were wrong on the timing, but, we think, right on the emotional/political significance of Clinton's race for the White House. Head over to Modest Jon's blog and check out some of the self-selected greatest hits of the blogosphere for 2008. It's been one helluva year, and somebody somewhere was blogging every amazing moment of it. Don't miss a click.
Posted by Roxie Smith Lindemann at 3:15 PM