Times are hard, you may have heard. Here in Roxie's World, where the primary wage-earners are state employees facing the prospect of furloughs in the next six months, we've had a series of increasingly frantic messages from our accounting firm (a now sad pair of number crunchers that we will call, let's see, not Dewey, Cheatem & Howe, but, um, TIAA & CREF) urging us to cut costs, increase efficiencies, and seize upon any available opportunity to make money. Right, guys -- Money-making is what we're all about here in the ad-free zone of Roxie's World.

Anyway, like other academics who got their holiday buzz killed by bad budget news this week, both moms sat in on a grim departmental committee meeting devoted to going over a list of cuts that might have to be made once the state lets Queer the Turtle U know how much of a hit it's going to have to take to get through fiscal 2009. And, please, don't even think about 2010.

Folks, we're real sorry to hear that the bailout for the auto industry has apparently fallen apart, but have you noticed that no one is even talking about a bailout for higher education? For years, public institutions like Queer the Turtle U have been stuck between the rock and the hard place of declining levels of state support and mounting pressure to keep tuition affordable. Caught in that vise, schools have fought to do more with less while scrambling to catch up to private institutions in the game of fundraising. That strategy worked reasonably well when times were good and the bubbles in stocks or real estate had a lot people feeling rich. Now? The party's over, public and private revenues have dried up, and schools are desperately trying to figure out how to cut costs without compromising the value of their brand (the ne plus ultra of higher ed under the consumer model).

Moose, who has a healthy respect for academic entrepreneurship, has a slogan for public institutions eager to prove that larger classes, smaller operating budgets, and reductions in advising and other forms of academic support are no threat whatsoever to the quality of education. She's been using the slogan informally all over campus at Queer the Turtle U this fall, but it hasn't been officially adopted yet, so, in the spirit of academic capitalism she has decided to auction it off here to one of my legions of loyal fans who works at some other cash-strapped public school. Listen up, Historiann! How 'bout it, Dog-Eared Book? the Shy One? Get in on the action, because this won't last long. Bidding opens now. Name your price in comments. All marketing suggestions (tee-shirts? coffee cups? backpacks?) welcome. Are you ready? Here is Moose's slogan for hard times in higher ed:

Excellence Without Money
Brilliant, don't you agree? Can't you just see it festooned on banners all over your campus, inspiring the young to scale the heights of pretending that everything is really just fine, no matter how many staff are laid off or how many searches are canceled or how many lines are cannibalized? Imagine the cool video your marketing department could produce, featuring a racially and ethnically mixed chorus line of smiling students dancing as fast as they can to a happy tune played by your school's marching band. Cue the tubas, kids! Let's show 'em what we're made of!

Meantime, here on the home front, we're considering a broad range of revenue enhancers to try to weather the storm of Great Depression 2.0. We realize we've been remiss in not seeking to capitalize on Roxie's World's strategic location near the epicenter of Obama Nation as the date of the coronation of the Precious approaches. That, I assure you, is about to change. Having no senate seat to auction off, we've decided to jump on the bandwagon and rent out space to the thundering hordes of Hopers and Changers preparing to converge on the national capital area around January 20. Why the heck not? Apparently, everybody else is doing it. We've already promised beds to three friends who will be in town for the occasion and actually plan to go, while we stay home and watch the festivities on teevee, having recently decided that inaugurations are like football: You see more of the action and are a whole lot more comfortable curled up on your couch than freezing your tush off in the not so great outdoors. 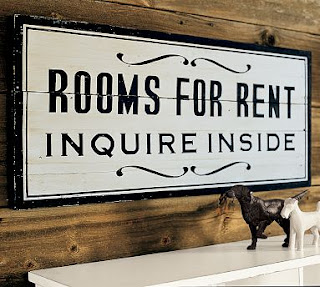 So, here's the deal. We figure we can sleep six more people in the house and maybe a hundred or so out in the ridiculously large back yard. We hadn't planned on renting out space there, but with word yesterday that camping will not be allowed on the national mall, we decided to make a play for the cash-poor granola-eating set insane enough to sleep outside in January. Take a look at our packages, and let us know what you'd like. Make your reservations in comments or by e-mailing me at roxieblog@gmail.com.

Yes, times are tough, kids, but if we all stick together, if we share the sacrifices and embrace the opportunities, we will get through our current challenges with our souls -- and, if we are lucky, our senses of humor -- in tact. Roxie's World is here for you, but as the bleeping governor of Illinois says, you've got to pay to play. So pay up, beloveds, and let's play on.

(Image credits: Seat for sale, via NYT; Rooms for rent, via PB)
Posted by Roxie Smith Lindemann at 9:00 AM