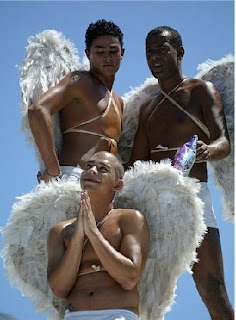 Newsweek seems to have taken a turn for the lavender. If you are not yet sick to death of the subject of same-sex marriage (but, please, how could you not be?), run over there and read Lisa Miller's cover story on how much more complicated the biblical view of marriage is than the fundamentalist caricature of "God didn't create Adam and Steve" would have one believe. Long story short: Most of the patriarchs of the Old Testament were polygamists, and the unmarried apostle Paul, chief architect of the New Testament's sexual morality, might actually have preferred the company of Adam and Steve, so it's fairly tricky to claim that the Bible is strictly committed to the one man/one woman model of "traditional" marriage. The article is already being denounced by the usual suspects, and it isn't likely to win a lot of converts or keep a lot of biblically inspired homophobes awake at night trying to counter the fine points of its theological arguments. Still, it's good to see a religious point of view more sympathetic to queers acknowledged in the mainstream media, which too often assume that Bibles are for banging and "religious" equals "homophobic."

While you're over at Newsweek, check out the results of a new poll purporting to show a post-Prop 8 surge in support for same-sex marriage. Moose realized she was officially sick of the subject and all public discussions of it when she ran across this line early in the (annoyingly triumphalist) story on the poll:

Moose for some reason became incensed at the words "more palatable than" and immediately fired off a message to a listserv on which the article had been posted declaring that she found caviar more palatable than poop on toast. She ended with this snarky salvo aimed at her fellow citizens: "As the good Rev. Wright said, 'God damn America.'" Perhaps now you see why Moose's writing privileges around here are so severely limited. I'm the dog, but she is the one on the leash. It's the only way to assure that Roxie's World remains the patriotic, family-friendly place my readers expect it to be.

Finally, because we don't want you to miss one single tidbit in the "gay is the new black" meme, we leave you with this vid, also from Newsweek, in which a number of queers weigh in on the aptness or inaptness of the black/gay analogy in arguments for civil rights. Especially helpful are the comments of Michael Crawford, who blogs at the Bilerico Project, on the problems of the analogy, one of which is that it erases individuals who are both black and gay. Go watch the vid. Y'all have been pretty quiet in comments here lately, but we're not giving up on the colloquium on history and the perils of analogy. It's exam season, kids. Study up, and weigh in: