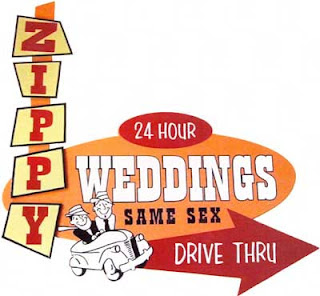 Bi-coastal battle for same-sex wedding biz heats up as MA legislature repeals 1913 law that had prevented non-resident queers from marrying in MA!

Gov. Deval Patrick has indicated he will sign the repeal and vows to challenge California for the coveted title of Homo Nuptial Capital of the USA! "Hell, yes," Patrick said when asked if he supported the repeal. "We want queers all over these United States to know that Massachusetts realizes gay money is GREEN, and we want those homo dollars to come pouring into our great commonwealth. There is no reason on earth for San Francisco and Napa Valley to suck up all that gay disposable income when we have perfectly elegant B&Bs and progressive churches all over the state -- from the rolling hills of the Connecticut River valley in the west (also known, I am told, as Lesbian Land) to the sandy tip of Cape Cod in the east, where the tea dances never stop. Come one, come all -- Massachusetts is open for the marriage business!"

The Massachusetts Office of Economic Development also announced today that as soon as Gov. Patrick signs the bill, the state will change its motto from the decidedly un-queer, "Ense petit placidam sub libertate quietem" (Translation: "By the sword we seek peace, but peace only under liberty") to the much more festive-sounding, "You're here? You're queer? Get MARRIED!"

No word yet on how California plans to respond to this unexpected challenge to its recently staked claim to the national gay marriage biz, but Gov. Arnold Schwarzenegger was reportedly considering a nuclear attack on the Bay State. "Damn those chardonnay-swilling East Coast liberals," he thundered. "Those pansy dollars are MINE!"

(Story picked up by way of Pam's House Blend, but the full scoop is in Bay Windows.)

Note to Readers: Every word of this story is true, with the possible exception of the quotes attributed to Gov. Deval Patrick and Gov. Arnold Shwarzenegger, and, oh, yeah, the stuff about changing the MA state motto. That bit about California nuking Massachusetts, though? We're standing by that one. If it ain't true yet, it soon will be. Hell hath no fury like an Ah-nold scorned.
Posted by Roxie Smith Lindemann at 6:38 PM