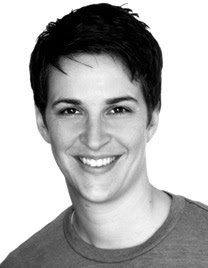 We would have pounced on this story yesterday when the New York Times reported that Butch Goddess Rachel Maddow is next on the list for a show of her own on MSNBC, but my typist was busy being a big drama queen about having a sinus infection of her very own. (Perhaps she was jealous of mine?) She lay on the couch most of the day, except when she was lying in bed, and devoted a considerable amount of mental energy to trying to decide whether her chest felt like it was being crushed in a vise or sat upon by, um, the late Chris Farley. How crummy did she feel? So crummy that instead of going to see the opening day of the much anticipated (in our house) Mamma Mia, the moms stayed home last night and watched last year's grim family flick, The Savages, with Laura Linney and Philip Seymour Hoffman. (Verdict? Awesome perfs, nice tribute to the salvific power of dogs [in the end], but not exactly what the doctor ordered for cheering up a sick chick.) Moose is feeling better today, thanks to the healing powers of antibiotics, Theraflu, Motrin, and an excellent bowl of Tom Kha Chicken soup Goose had brought in from a nearby Thai place that actually delivers. (Go on, suburban MD readers. Click on that link, and show a good neighborhood joint some love. The steamed dumplings are yummy, too.)

Anyway: back to Rachel. Y'all know Dr. Maddow (she has a PhD in poli sci from Oxford) is tops on the list of Famous Butches We'd Most Like to Date or Be here in Roxie's World. We've been dreaming of her having her own show for quite some time and would be delighted if MSNBC gave Maddow a timeslot in an effort to redeem itself from the idiocies of the caveman lefties who otherwise dominate its evening programming (yes, Chris Matthews, we mean you, as well as Mr. Unhinged by His Delusions of Being the Second Coming of Ed Murrow, Keith Olbermann). We're so excited by the idea that we can't even get upset about the fact that the Times story didn't run a full-on face shot of Her Butchness, instead using this admittedly odd back-of-the-head pic at the top of the story: 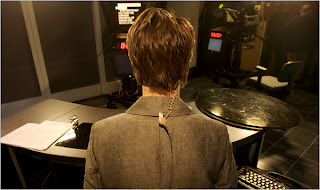 Melissa McEwan cranks up some good feminist indignation over the Times' strange photo selections over at Shakesville, but we're going to continue with our happy dancing and our fervent praying that Rachel will actually replace Tweety when his contract is up for renewal next year. Oh, what a day of rejoicing that would be!

In the meantime, Rache, we took a vote and have decided to let you have Butch PhD (coined right here in Roxie's World) as the title for your show on two conditions:
We know you're probably being deluged with advice and adoration from sycophants, hangers-on, and wannabes right now, but we hope one of your loyal butch followers up there in the lesbo-land of western Massachusetts will find a way to get this humble blog post to you. Roxie's World is ready to help in any way we can to advance your career and the cause of butch visibility. Call us, Rache. We are eager to please. You. Really.

(With thanks to Dog-Eared Book, who knows just what it takes to cheer up a sick chick.)
Posted by Roxie Smith Lindemann at 1:44 PM