My typist is too busy drinking wine and savoring the last moments of the great Scandinavian Adventure to sit down and write about the Stockholm and Norway portion of the Moms' current trip, but here are a few photos I was able to pry out of her hard drive.

It was Fashion Week last week in Stockholm, and it would appear the Moms had some kind of major makeover. You'll have to agree it's a striking look -- and quite a change for a couple of style-challenged feminazis: 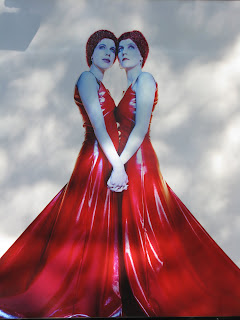 Yes, for those of you who were concerned, the Moms did manage to celebrate the Fourth of July in Norway. Their friend Janne kindly agreed to display an American flag/sock that she had had in storage during the Shrub years, and Moose fixed her famous beer-can chicken for a gathering of easily impressed Norwegians. The evening concluded with dueling choruses of the national anthems of the U.S. and Norway. The consensus was that Norway's singable, non-militaristic "Yes, We Love" is a much nicer song than the bomb-bursting, throat-busting American anthem. Here is Janne's pretty flag/sock: Here is the lovely new Oslo Opera House, which the Moms saw during a relaxing boat tour of the Oslo fjord on Friday: 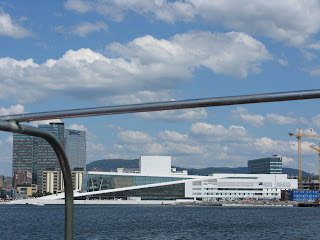 Mr. Bruce Springsteen has been following the Moms all over Scandinavia. He played Göteborg, Sweden on July 4 and 5 and will be in Oslo tomorrow and Tuesday. No, the Moms will not be going, but they did tune in to a great TV show about the Boss's passionate Norwegian fan base. Janne says the Norwegians appreciate Springsteen's authenticity and his loyalty to his humble roots in a small town on the Jersey shore. The Moms think perhaps the low-key Nordics really just love a guy who knows how to cut loose and tear a town apart through the gospel of rock 'n roll. Baby, we were born to . . . ice-fish. 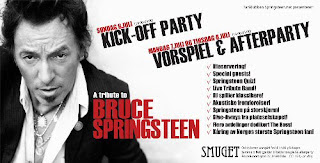 Update: You really must check out this interview with two of Bruce's besotted Norwegian fans, who have been camped out in a cold rain for two days waiting for their meeting with the man from the other side of the Atlantic. Highlights: The guy's earnest performance of "The River," which sounds more Tom Waits than Bruce Springsteen, but we give him points for trying; the girl's tattoo of "Born to Run" on her ankle. According to our personal Norwegian translator, she explains that the text just fits with her life.

(Photo Credits: Moose, except for the Bruce poster, which we found here.)
Posted by Roxie Smith Lindemann at 6:55 PM