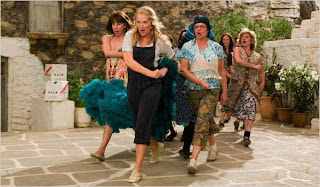 Goose's Extremely Short Review of Mamma Mia!: I could watch Meryl Streep playing poop on toast and be utterly mesmerized. And happy.

Moose's Snarky Addendum to Goose's Extremely Short Review of Mamma Mia!: Agreed. But I would vote for Barack Obama if he promised to support a constitutional amendment banning Pierce Brosnan from ever singing in public again.

Goose's Pithy Rejoinder to Moose's Snarky Addendum to Goose's Extremely Short Review of Mamma Mia!: Agreed. And I don't suppose the fact that Brosnan is not a US citizen will be any impediment to the Great and Powerful Lesser being able to enforce such an amendment once it unanimously passes both houses of Congress and is ratified by all fifty-seven states. He Who Sees All will surely see to that.

Per usual, we digress, even when the subject is an estrogen-fueled summer diversion as puffy as a cloud of cotton candy featuring actresses we just flat-out adore -- not only Streep but the bad-ass Christine Baranski, whom we've loved since her days as Cybill Shepherd's drunken sidekick on TV's Cybill. A. O. Scott's review in the Times does a marvelous job of capturing the perverse delights and the deep flaws of Mamma Mia! Scott is kind to everyone in the film, with the possible exception of director Phyllida Lloyd, and happily succumbs to "its relentless, ridiculous charm" and its loopy disco-powered sensibility. (For those of you too cool to tune in to such vulgar tripe, Mamma Mia! is the musical that was always waiting to be plucked out of the oeuvre of ABBA, the phenomenally successful Swedish pop group who made the 1970s worth living, at least according to the chief Dancing Queen of Roxie's World. The show was brought to the stage in 1999 by producer Judy Craymer.)

Mamma Mia! requires nothing or everything of its audience, depending on your position on a) the musical as a theatrical genre, b) disco as a musical form and cultural force, c) movies adapted from stage musicals based on pop cultural phenomena of the 1970s, and d) major Hollywood actresses faced with a dearth of decent roles for women over the age of, um, 23.
then you will enjoy Mamma Mia!. If not, go see The Dark Knight and come back here and tell us all about it. The truth is, we're not giving the film a top-of-the-chart 5-Paw Rating. It's a 4 at best, even with Streep having a ball and Baranski raising the roof of the theater with her killer performance of "Does Your Mother Know?" The movement from stage to screen is always tricky, and it isn't without its problems here. The illusions of the musical are harder to accept on screen and less comically effective than they are on stage. With the exception of Baranski, none of the leads is truly a great singer or dancer, and Brosnan is genuinely, cringe-inducingly bad. Moose left the theater muttering that he made Christopher Plummer's wan vocals in The Sound of Music sound like Pavarotti.

Nonetheless, if you love musicals, disco, Streep, and the azure waters of the Aegean, you could do worse than to spend a couple of hours giggling and humming your way through Mamma Mia!. Streep's 5-minute "The Winner Takes It All" is worth the price of the ticket, because in this brief interlude the film earns the emotion it's working a little too hard to get in other moments. Here, you feel the pain of Streep's Donna over her 20-year separation from Brosnan's Sam. And here, Streep cuts loose and lets you see that there's a real belter underneath the porcelain goddess with the MFA from Yale. Here's a snippet from the final minute. Work it, girlfriend: