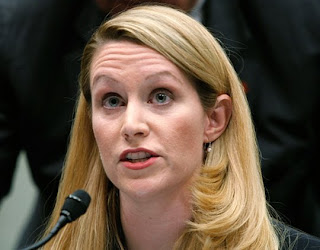 (Photo Credit: Mark Wilson, via NPR; Monica Goodling testifying before Congress in May 2007 about her role in the firing of nine U.S. attorneys.)

The guys in Clicks and Eyeballs were puzzled earlier today by a number of hits to Roxie's World from Google searches on Monica Goodling and Leslie Hagen, who figured in an April post we did called "In Justice," which focused on the termination of Hagen, a contract attorney in the Department of Justice under Alberto Gonzales, who was let go because Goodling, a senior aide to Gonzales, believed Hagen was a lesbian. Finally, the nerds over in research did a little sniffing and clicking around and realized that Goodling and Hagen were back in the news because DOJ's inspector general released a report today on Goodling's illegal politicization of hiring practices at Justice during her brief reign of error in 2006-07.

Goodling was White House liaison to the Justice Department and seemed not to grasp the crucial distinction between political appointments and non-political career positions, which are supposed to be walled off from partisan political pressures. Ms. Goodling, a 1999 graduate of Pat Robertson's renowned Regent University law school, used in-person interviews and Internet searches to try to determine the political beliefs and associations of people applying for career positions. She routinely (and illegally) asked candidates for non-political positions the same questions (about, for example, their political philosophies and why they wanted to serve President Shrub) that were asked of political appointees. Goodling resigned from Justice in April 2007 and acknowledged in testimony before Congress that she had probably acted illegally in vetting candidates for career appointments.

New York Times' report on the IG's report is here. dday blogs the report and Goodling's ignominious legacy here. If you go read the full report, which again is here, the section on the firing of Leslie Hagen, though she is not named, is on pp. 133-38.

What's the takeaway on this sordid little episode from the fat, tawdry annals of corruption in the Shrub years? Well, for starters Roxie's World stands by the idea, pitched here in April, that Jodie Foster should make a movie out of the melodrama of the Christian law-breaker versus the Sapphic do-gooder, assigning herself the role of Leslie Hagen and getting Gwyneth Paltrow to co-star as the evil, bottle-blond Goodling. Can't you just see it, people? Work with us! Secondly, we think Goodling is a powerful reminder of the dangers of government being taken over by ideologues who are so blinded by devotion to a cause or an individual that they see themselves as exempt from obedience to the law. Now, why should that be on our minds? Gosh, jeez, I don't know, kids. Couldn't tell ya. Long summer evenings spent sipping wine down by the fish pond have perhaps warped our judgment, made us forget that a new light has broken upon the world and we shall no more live in darkness. The rising waters shall recede, and the sick shall be healed -- but who will be making hiring decisions at Justice, and how will they be made? Will "our" side be any less cynical in its manipulation of rules and procedures than "their"side has been in the last eight years? Will hard-working dykes be able to do their jobs without worrying they will kicked to the curb should their private lives become political liabilities?

Unseemly questions, I know, but you can't blame an old dog for remembering that human beings, regardless of party, are pretty much alike. You may mean well, but you have a nasty habit of assuming that having opposable thumbs means you actually know what you are doing. Think about that before you commit your hearts or your votes to anything or anyone. I'm just sayin'.
Posted by Roxie Smith Lindemann at 10:30 PM