The Way We Weren't 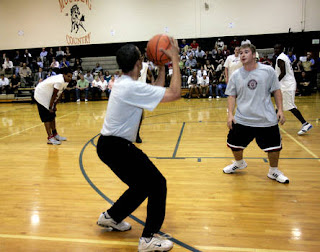 Moose has been wandering in a fog of memory all weekend, and it’s Barack Obama’s fault.

Pardon the sudden obsession with Indiana, kids, but Obama played basketball on Friday in the gym at Moose’s junior high school, Maple Crest Middle School in Kokomo. (Click on the photo above to see "Mustang Country" on the back wall of the gym. That's for the Maple Crest Mustangs, of course.) His team won 13-5 in a 3-on-3 contest. That is far less impressive to Moose than the fact that the skinny black guy with the funny name got out of town alive.

Back in the early 70s, when Moose lived there, Kokomo was a gritty light-industrial town surrounded by cornfields. It was just a little too close to its racist past as a bastion of Ku Klux Klan activity in the 1920s for Moose’s comfort -- and it’s not as if her racial or political consciousness was particularly evolved at that point. She was barely 11 when her family moved there in the spring of 1970. As the Moosians made the first step in a great migration that would take them to three different towns by the time she made it out of high school, Moose’s most pressing concerns were whether she would ever master the new math that was being taught in her new school and what radio station would play the dreadful pop music she favored in her pre-teen years.

Kokomo, Indiana in the early 1970s was the archetypal “wicked little town” conjured in the song of that name from John Cameron Mitchell’s Hedwig and the Angry Inch. How wicked? Well, Moose would say that Miss Walden, the Nazi ex-cheerleader from hell who was her P.E. teacher and tormented Moose with the humiliations of gymnastics for three years, was wicked. Or she might say that her best friend’s brother, who taunted her on a daily basis in the way that boys from time immemorial have taunted girls, felt wicked back then, though now, of course, he is a perfectly nice man.

But, really, when Moose thinks of wickedness in connection with Kokomo, she thinks of the cross burning.

When she read about Obama’s historic visit to Kokomo (historic because the last presidential candidate to campaign there was Ronald Reagan in 1980), Moose called up that best pal from junior high, Mel, whose mom still lives there. Moose and Mel were girls together in all the ways Toni Morrison describes in her novel Sula. They were inseparable companions in the gawky years of early adolescence. In the refuge of their friendship, they didn’t have to worry about sounding too smart or not having a cheerleader’s grace or pep. Mel taught Moose how to play cribbage. When Moose started playing guitar, she wrote silly songs that only Mel would hear. Together, they walked endless loops around their subdivision, thus discovering that their non-cheerleader’s bodies were amply endowed with endurance and other strengths Miss Walden had overlooked. They survived heartbreaks, hangovers, and the usual assortment of professional and existential crises, and to this day they have a friendship that is rich and sturdy, despite periods of neglect. It’s the kind of friendship in which, after months or even years of spotty contact, one can impulsively call the other up on a Saturday afternoon, and the one who picks up the phone will say, “Wow, I was just thinking of you! I’m reading this book, and it’s all about writing and life and -- ”

“Cool, but did you know that Obama played basketball yesterday at Maple Crest?”

“I’ve started reading the Indianapolis Star on line to keep up with the primary campaign in Indiana. He was in Kokomo yesterday. They’ve got this whole photo gallery of him in the gym at Maple Crest.”

From there, Moose and Mel do a quick pivot down memory lane, because Moose needed help sharpening up her recollection of a series of incidents that made Obama’s warm welcome in Kokomo seem nothing short of miraculous to her. Perhaps it’s unfair of her to assume that the town’s attitudes wouldn’t have changed in 35 or 40 years, but some impressions are hard to shake, even when the details of memories grow fuzzy.

Moose and Mel aren’t sure if it was 1971 or 1972, but Mel clearly recalls that it happened late on the night of the 4th of July – actually, early in the morning of the 5th. They also couldn’t remember why they weren’t together for the 4th because they were, as I said, inseparable. Moose must have been off on some family thing, but Mel spent the 4th in the neighborhood, hanging out with other kids, including Brian Burnett, the middle child in the African-American family who had moved into the neighborhood not too long after Moose’s family had moved in. Moose and Mel don’t recall anybody making a big deal out of the Burnetts moving in, and they don’t remember getting any kind of encouragement or discouragement or advice from their parents about how to treat the new neighbors, the first family of color in the neighborhood. Moose has it in her head that Leesa, the older daughter, was smart and sweet. Mel says that Kim, the younger girl, was beautiful. On that 4th of July night, Brian was part of a group doing fireworks – sparklers and “snakes” – the kind of thing today’s overly protected kids don’t get to do. They probably spent part of the night in a rousing game of “Ditch ‘em,” the local version of tag that was played incessantly in summer.

Mel’s family lived in a house at the end of a court. The Burnetts lived at the opposite end of the court, about a hundred yards away. Late that night, as Mel was getting ready for bed, she heard her father call her mother to come downstairs to see something. Her mother was tired and told him just to tell her what he saw. “No, Rose,” he said. “Come here. You need to see this.” Mel overheard the conversation and went downstairs, too, her curiosity piqued. She looked out the front window and saw a cross burning in the Burnetts’ front yard.

What was said that night, as two parents and their youngest child stood watching a terrorist’s obscene torch light up the sky of their neighborhood? How did Mel sleep with such a vision in her mind’s eye? Sometimes time is merciful in blurring the edges of memory. What she and Moose vividly recall is walking together the next day down to the Burnetts’ house, Mel showing her the charred spot in the yard, Moose bending down, rubbing her hand across the spot, smelling the distinctive odor of burnt fuel. What did they say to each other then? Were they frightened? Sad? Did they knock on the Burnetts’ door to offer friendship or support? Did the community do anything to express outrage or find the culprits? Or did people, out of shame or fear, retreat into the polite silence of the Midwest? Again, memories are fuzzy, though Melanie recalls that there were three cross burnings in Kokomo that night and that they were reported in the local paper, the Kokomo Tribune. Moose, having gotten curious about this point of local history, is now using research to fill in memory’s blanks. We promise to update you if we turn up any clarifying details.

. . .try pretending
your time does not exist
that you are simply you. . .
try telling yourself
you are not accountable
to the life of your tribe
the breath of your planet
--Adrienne Rich, “North American Time”

History supplies one useful, if terrifying, bit of context for the fragmentary recollections of Moose and Mel. On the 4th of July in 1923, the Ku Klux Klan held one of its largest gatherings ever -- in Kokomo, Indiana in a place called Malfalfa Park. Some estimates suggest as many as 200,000 people attended. Malfalfa Park no longer seems to exist, but Malfalfa Road is the western boundary of the neighborhood where Moose and Mel lived in the 1970s. Also: Moose’s mother taught high school in Kokomo from 1970 to 1972 and recalls a period of racial unrest following court-ordered desegregation. The cross burnings might have been a part of that unrest or could have helped to provoke it. Finally: When Moose was a cub reporter a few years later in Bloomington, in 1979 or 1980, she was sent to Kokomo to cover a Klan march that turned out to be not that big a deal. Still, the remnants of a sordid history lingered, for decades.

Fuzzy or treacherous as memory may be, Moose is haunted by a flaming cross she never saw and so cannot help but marvel that Barack Obama was welcomed in the wicked little town she never regretted leaving, though she left behind a friend as dear as life itself. For the moment, we will leave aside the questions of whether that welcome is proof that Kokomo has overcome its shameful racist past or merely embraced a candidate who makes forgetting easy and pleasant. We will close by giving the citizens of Kokomo a paws up for being good hosts – and by reminding our readers that Indiana hasn’t voted Democratic in a presidential election since 1964. And the last time before that? 1936.
Posted by Roxie Smith Lindemann at 12:35 AM