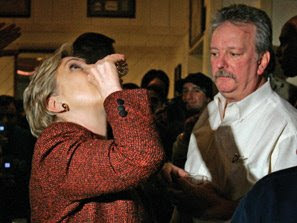 Video of Hillary's belly up to the bar moment is here and its political resonances are probed here, but we want you to watch this long glorious scene from The Unsinkable Molly Brown, because it's what we think of when we see a tough woman knocking down shots with the boys just because she can. Debbie Reynolds chews up the scenery, and Peter Gennaro's choreography will take your breath away. Swear to dog. In the wacky world of Moose's pop culturally mixed childhood, the soundtrack album to this 1964 film was as big as Meet The Beatles. She knew all the words to both. Still does, in fact. Anyway, the toe-tapping vid:

This one goes out to the late, great Frig, who taught Moose to love the musical, to all the girls who needed three gulps but managed to get the shot down without choking, and to qta and Mel, who are helping Moose put on a show this week. Miss you, are you, love you. Mean it.

And for Hillary, who keeps swimming.

Go read this wonderful piece by Rebecca Traister in Salon on young women who are sick of the trashing of Hillary, even if they are supporting Obama. It's an unusually nuanced analysis of generational divides among women and of how the F word (feminism) is playing out in the election.

Check out Anglachel's Journal, a blog that's recently landed on our radar screen. She's a Clintonista whose instincts strike us as razor-sharp.

Hang in there with us, kids. We're working hard to stay afloat ourselves right now, but our hearts are always here with you. Swear to dog.
Posted by Roxie Smith Lindemann at 11:18 PM