Texas Is In No Way a Pig State 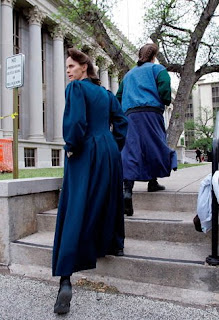 We love it when life imitates one of our favorite TV shows, especially when the imitation involves the colorful home state of one of the moms of Roxie’s World.

This one is for Goose, born and raised in San Angelo, Texas, where a no-nonsense district court judge is now trying to figure out what to do with 416 children found living in a compound of the Fundamentalist Latter Day Saints that was raided by the state’s Department of Child Protective Services earlier this week. The Tom Green County courthouse, where Judge Barbara Walther has ordered DNA tests to try to sort out the complicated web of family relationships that had developed on the Yearning for Zion Ranch near Eldorado, is where Goose’s late father Earl got his start as a judge back in the early 70s. He held the very same position – 51st District Court Judge – that Walther holds today.

We’re calling it Big Love, Texas-Style, or just Bigger Love, which comes down to pretty much the same thing, but our post title is taken from a comment on the web site of the San Angelo Standard Times, which is exhaustively covering the FLDS story, where a lively debate has broken out about which is ickier: polygamy or government intrusion on the sovereignty of the individual. It’s a fascinating discussion, punctuated by such illuminating exchanges as this comment by an entirely reasonable fellow who calls himself Anasazi:

You women in San Angelo are being fooled. Yes, [incarcerated polygamist prophet Warren] Jeffs is a punk. Any moron can figure that out. Jeffs is in jail. I'd be more concerned about the pig state that runs your life and keeps you a slave at $7.00 an hour. Can you proud women of San Angelo make a living there at the min. wage of $7.00 an hour?

To which RJ sweetly replies:

I am a woman in San Angelo and I assure you that I make WAY more than $7 an hour. Texas is in no way a pig state -- it is the only state that can stand alone without the other 49 if it chooses to. The other states would be in a world of hurt if they had to survive without Texas.

Oh, how we love the internets for letting us tune in to the voices of ordinary men and women exchanging their opinions on the issues of the day! Here’s to the democratization of thought! Here’s to everything being on sale in the marketplace of ideas!

Question 1: How big do you think RJ’s big hair is?

Question 2: Do you notice how easy it is to tap into that deep vein of Texas pride and resentment regarding the brief period of Texas independence (1836-1846)? Moose has chuckled for years over this particular quirk of the Texas character. She thinks it explains all kinds of things, from Goose’s impressive self-confidence to the tendency of women in her family to show up at reunions with guns in their purses. Small guns, but still, guns. The women in Moose’s family stuff their purses with the more usual accoutrements of middle-class femininity: Kleenexes, small flasks, an assortment of serotonin reuptake inhibitors, maybe a tampon or three.

We digress. We agree with RJ, of course, that Texas is in no way a pig state. Texas is a lovely and sophisticated state which we heart greatly for giving us Molly Ivins, some of the finest live music in all the world, and the concept of the drive-through breakfast taco. It may shine an unflattering light on the Lone Star State, but the FLDS story provides a valuable opportunity to ruminate upon that deep tension at the heart not just of Texas but of all fifty of these goofy United States between the belief in the sovereignty of the individual and the desire to police, control, and limit religious, sexual, and other differences. We are not big fans of religiously motivated polygamy here in Roxie’s World, and we are strongly opposed to teenage girls being forced to have sex and bear children with creepy older men. We’re not wild about the deeply unflattering fashion styles favored on the compound either, but as fans of Big Love we understand the sect’s commitment to the look of Little House on the Prairie.

We are still digressing, aren’t we? That’s because we are wrestling with the temptation to posit an analogy between Mormons and queers as we think through the issues of sovereignty v. state control that the colloquy between Anasazi and RJ brings to the fore. Big Love traffics continually in this analogy, as the Henrickson family negotiates the daily risks and challenges of polygamy in the suburbs. Metaphors of the closet abound, and subplots are driven by conflicts between the need for secrecy and the desire for openness, especially as the older children of Bill and first wife Barb, who were not born into polygamy, grapple with friendships, sexuality, and their relationship to their changed and changing family. On the show, the analogy works as a way of understanding the affable yet besieged Henricksons, who come across as clean-scrubbed sexual utopianists committed to a non-normative relational order. Polygamy for them seems motivated less by religion than by a social ethic of caretaking and shared responsibility. (In the show’s back-story, Bill and Barb became polygamous when Barb was stricken with cancer. An extra wife or two comes in handy during times of crisis, it seems.) Moose calls Big Love the queerest show on television because it challenges audiences to re-imagine intimacy and candidly portrays the complex circulations of desire within families, particularly between and among the “sister-wives” in the Henrickson household. If we were writers of slash fiction, we would pen a steamy scene between Jeanne Tripplehorn’s Barb and Chloë Sevigny’s Nicki.

On the show and in the real-world drama unfolding in West Texas, however, the analogy between Mormons and queers breaks down around issues of coercion and consent. Adamantly as we support sexual freedom as an aspect of free expression and committed as we are to diversification of family and relational structures, we have never thought hetero-polygamy was a great deal for women or children, especially female children. We can’t join in Anasazi’s outrage toward the pig state that storms in and pulls 416 kids out of a situation in which girls as young as 13 are alleged to have been raped, beaten, and impregnated by men in their fifties. The right to free expression doesn’t include the right to victimize those who are too young to make free, informed choices. The state has a right and, indeed, a responsibility to try to protect children and others with a limited capacity to consent. (Should we debate age-of-consent laws and the sexual rights of children? Nah, not here, not today.)

The challenge in any case that pits the sovereignty of the individual against the state’s responsibility to prevent harm is to know when the state is acting rationally and legitimately and when it is acting out of bias against persons or practices that it finds objectionable when no real threat of harm exists. That is why it is not inconsistent, in our judgment, to feel relieved that 416 kids have been removed from the Yearning for Zion Ranch and yet feel outraged that states and the federal government continue to deny consenting adults the right to marry a person of the same sex. In that sense, we regretfully conclude, Texas is a pig state after all – and so are all of the others, with the brave exception of Massachusetts.

Big love to all of you, kids. We’ve missed you and are happy to be back here in the ‘sphere where we belong. Peace out.
Posted by Roxie Smith Lindemann at 2:43 PM