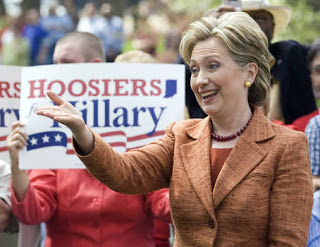 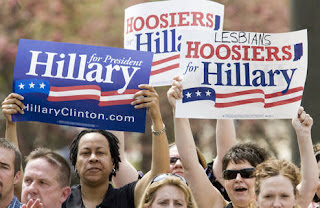 What if it all comes down to Indiana -- the Democratic race for the presidential nomination? What if it all comes down to a hardy band of lesbians following Senator Hillary Clinton up and down the state -- from Moose's birth place of New Albany, along the banks of the Ohio River, to the comfy suburban enclave of Valparaiso, close to the shores of Lake Michigan, where she graduated from high school -- with signs saying, "Lesbians Hoosiers For Hillary" (sic and see above)? A lot of people are saying that it might.

I don't think Moose will be able to take it, kids. I think she'll cancel classes for the semester. I think she'll find some clever way to bail out of the last few meetings on Learning Outcomes Assessment that she's committed to attending. I think she'll throw a cooler and a couple of pairs of clean underpants in the Prius and hit the road, with or without me and Goose, to claim her native land for Hillary, to save America, to cast down her bucket with the candidate whom she fondly refers to as Rocky with brains, boobs, and a health-care plan.

Don't you all think it's weird that Goose's home state of Texas resurrected a candidacy that seemed on the brink of death and that now Moose's home state of Indiana, which, in all honesty, has to be the dullest place on dog's earth, is now the epicenter of the election that will transform the universe? Does it affirm your belief that Roxie's World is ground zero in everything that matters? Does it give you Goosebumps? Mooosebumps? Roxie-bumps?

Fasten your seatbelts, kids. We're headin' out to the heartland to get this whole mess sorted out. Stay tuned. Stay faithful. And consider having a few close friends over for waffles this weekend. We want Obama to be able to finish his waffles, so let's commit ourselves to waffle-eating. Send us your favorite waffle recipes, and we'll see if we can't find a way to give Senator Obama room and time to finish his breakfast in peace. Go ahead, Barry. Clean up your plate. We'll answer the phone. Really.