Tuning In/Out to Stevie Nicks, In Your Dreams

The long. hot. horrible. summer of 2011 continues, and Roxie's World is working hard to ignore it. Why? Because we don't have any economists or climate scientists on staff, and political prognostication is really just kind of a hobby for us. Besides, we figure our legions of smarty-pants loyal fans know where to go to get their fill of bummer-inducing news and analysis and come here to get little dribs and drabs of health and happiness to try to keep their glasses close to half full while they wait patiently for the handbasket to come whisk them away to Hell. Which should happen, like, any minute now, don't you think?

We'll return to more serious programming over the next few weeks as the Moms shift into Back-to-School mode. (Srsly, kids, I swear: Moose is not going to turn this into a health, food, and fitness blog, recent appearances notwithstanding.) Meantime, let's indulge in a little musical interlude to wile away a cloudy summer evening. 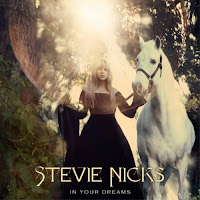 Stevie Nicks released her first solo album in ten years a few months ago. It's called In Your Dreams, and it's been in extremely heavy rotation in Roxie's World ever since it arrived. It's a smooth, tight record, as dreamy as its title would lead you to expect, with 13 songs written by Nicks and, mostly, producer Dave Stewart. Nicks' voice is in fine form. The singer is 62, and you can hear the marks of time and experience on a voice one reviewer described as having "steely sides, but its center is worn and approachable, like suède." Perfect.

In Your Dreams doesn't break new ground, lyrically or musically, but it comfortably mines the emotional, intuitive terrain Nicks knows so well. Moose has a soft spot for "Cheaper Than Free," a sweet celebration of love in which Nicks' and Stewart's middle-aged voices blend to give rich texture to the admittedly sappy words -- but, hey, high passion is demonstrably better than high fashion. Both moms are keen on "Wide Sargasso Sea," a hard-rocking synopsis of Jean Rhys' novel, and "Annabel Lee," a lush adaptation of one of Poe's creepy/beautiful poems on the allure of a dead woman. These two exercises in feminist criticism induced Moose to describe In Your Dreams as the album you always wished Gilbert and Gubar had made.

And you did always wish that, didn't you? Isn't that how everybody got through the 80s? In any case, treat yourself to In Your Dreams. It will mix well with all those other albums by husky-voiced wise women that are rattling around in your record machine. We'll play you off with "Annabel Lee," because that's the cut Goose has been passing along to all the 19th-century poetry geeks in her acquaintance. Take it away, Stevie.

Email ThisBlogThis!Share to TwitterShare to FacebookShare to Pinterest
Labels: music