The Moms and Ms. Ruby are hanging out in a beach town in Delaware this week, getting in a little queer family vacay before they hunker down for the start of a new academic year. They are with Geoffrey, Candy Man, kiwiboy (also known as Son of Candy Man), and a charming new fellow who shall be known in these precincts as the Italian Stallion. Yesterday was a rainy day, so our resourceful gang did what beachcombers from time immemorial have done when nature puts the kibosh on plans to spend the day staring at the ocean while the sun turns one's skin to shoe leather.

They strolled the beach between storms taking moody shots of the scary looking sky and the nearly deserted beach, which Moose made even moodier looking through the magic of CameraBag: 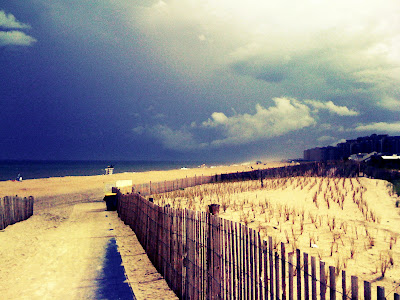 They prowled the rooms of their rental home documenting the many fine examples of the style known as Beach Kitsch: 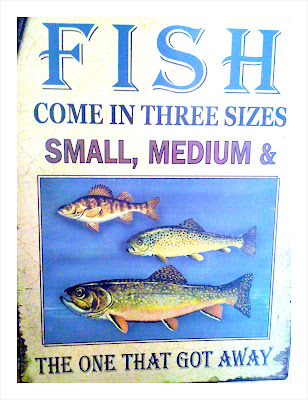 And, of course, they cooked. And ate. And drank a little. Moose declared it a no-point day and gave herself permission to indulge without guilt, though she did take Ms. Ruby on a number of walks.

Candy Man and the Italian Stallion collaborated on a gnocchi so good it would make an Italian grandmother wish she had a gay grandson: 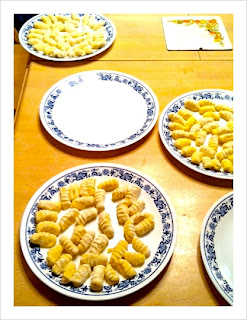 And tomato sauce so simple and so perfect it would make Marcella Hazan swear off onions forever: 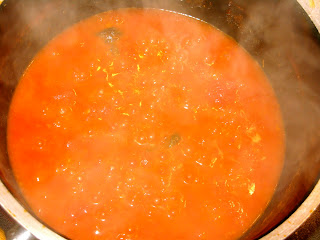 And because there were peaches aching to go out in a blaze of glory, Moose whipped up a batch of what she termed beach cobbler (recipe and rhapsody on this delicious dish here): 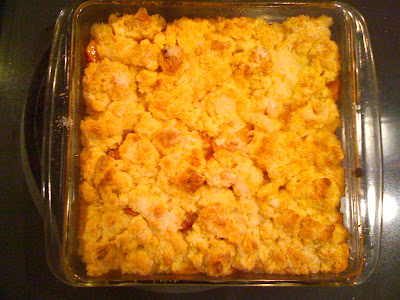 It was a lovely day, despite the torrents of rain falling from the menacing sky, which just goes to show that even a deluge can't rain on your parade if you are determined to have a good time. Who'll stop the rain? asks a famous song of the hippie/folkie/rockie era. Why, no one, darling. You're never going to stop the rain by complaining, so, you know, don't. But, still, a great song is a great song. We'll play you off with a little CCR before we head down to the beach -- where, we are pleased to report, the sun is for the moment shining as happily as Michele Bachmann at a Christian corn dog festival. Peace out.