As we ease our way back toward serious blogging, we thought we'd call your attention to a few stories that caught our attention in between ocean swims and fine meals and beach reading of books Moose emphatically decided not to include in the trans lit course she'll be teaching this term.

The Aging, Vegan Ex-Presidential Body: Bill Clinton turned 65 the other day, which prompted a spate of stories on the Big Dawg's impressive efforts to manage his heart disease through diet and exercise. The former president, who has a family history of seriously bad tickers, had a quadruple bypass in 2004 and angioplasty in 2010. Since then, working with Dr. Dean Ornish, he has dropped 20 pounds  and become mostly vegan, though he confesses to CNN's Sanjay Gupta to having a bite -- one bite, he says, with a wag of his famous finger -- of turkey at Thanksgiving. Moose liked this story because she is delighted to claim her favorite living former president as a comrade in Lifestyle Adjustment. She also thinks it's good for the country to have to reckon with seeing the nation's most famous devotee of Big Macs and Krispy Kremes as a poster boy for clean living and healthy eating. Moose imagines she would choose death over veganism, because she isn't sure she could live in a world without eggs, but she was endowed by her creator with a ridiculously healthy heart and so has never had to face that choice. Mostly, though, we like this story because it offers further proof that we just can't stop thinking about Bill Clinton's body. We need to know what he is ingesting, how he is looking -- fabulous! -- and how he is feeling (more energetic than ever!). Clinton's successor in the Oval Office also turned 65 earlier this summer, and the AP story focused on the thousands of virtual birthday greetings he received through a campaign orchestrated by his wife. No one, it seems, wants to think about Shrub's aging body or what's going into it. I know: Quelle surprise. And we sincerely apologize for putting that image into your head so early in the work week.

The Professorial Body: Duke's Cathy Davidson, who is garnering raves for her new book, Now You See It: How the Brain Science of Attention Will Transform the Way We Live, Work, and Learn, did a marvelous blog post a couple of weeks ago on a Pilates class that resonated with some of our musings here about yoga, bodies in middle age, and minds/bodies in techno-culture. The post advocates balance, breathing, and compulsory dance movement in schools and workplaces as a necessary counter to the seated life of the mental worker staring at the screen. It offers compelling observations about kids' relationships to their bodies and movement in an age in which bike helmets and pain avoidance constrain them in both body and soul. It even offers a couple of simple exercises to foster alignment and deep breathing. Read the post. Try the exercises. And get Davidson's book, for dog's sake, because everyone else you know is getting it and you don't want to be out of the loop. We've got Now You See It loaded up on Kindles and iPads throughout Roxie's World and can hardly wait to read what this passionate yet practical digital visionary has to say about the world in which we live, think, work, and breathe. 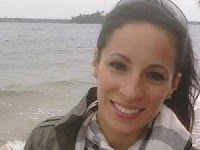 The Lesbian Body: Christina Santiago was 29 years old, a lesbian, a native New Yorker living in Chicago, and manager for the Lesbian Community Care Project at the Howard Brown Health Center. She was killed in a freak accident at the Indiana State Fair on August 13. Four other people died, and Santiago's partner, Alisha Brennon, was also seriously injured when a concert stage collapsed in a strong thunder storm just before the group Sugarland was to begin a show. The story caught our eye in part because the tragedy occurred in Moose's home state but also because of allegations that began circulating on the queer interwebs that the Marion County coroner's office refused to release Santiago's body to Brennon for burial because of the state's DOMA law. First reported by Bil Browning on The Bilerico Project, the charge went viral when Dan Savage wrapped it up in a fiery denunciation of how such laws "serve to torment and persecute gay people at the most trying moments of their lives."

The problem, as it turned out, is that the story wasn't true. The critically injured Brennon had not contacted the coroner's office and appears not to have been treated disrespectfully by anybody. Her partner's body was released to an aunt of Santiago's who was listed as her next of kin. Santiago's funeral and burial were in the Bronx, but those closest to Santiago and Brennon suggest matters were handled amicably and sensitively. Brennon is still hospitalized but seems to be recovering. Bil Browning posted a lengthy apology for his poor judgment and reporting, admitting that his "history of dealing with homophobic behavior by Indiana office holders" likely predisposed him to believe the story without sufficiently verifying it. In his retraction, Savage noted that, "These sorts of things have happened -- surviving gay spouses barred from bedsides, not allowed to retrieve their partner's remains, barred from funerals by hostile family-of-origin members -- but it didn't happen this time."

Savage is right, of course. Such things do happen, and we need to work hard to reduce the likelihood of their happening by securing full legal equality for LGBT relationships. That will require overturning the federal Defense of Marriage Act and every mini-DOMA on the books in states from sea to shining sea. Bil Browning is to be commended for his thorough and thoughtful self-criticism, but we can also learn something from his mistake, from his -- and our -- willingness to believe that a low-level functionary in a coroner's office would see it as his or her job to enforce a state DOMA in such a cruel fashion. (Since Santiago and Brennon were residents of neighboring Illinois, Brennon could presumably have claimed her partner's body under that state's domestic partnership law.)

Again: Such things do happen, but that doesn't mean we can assume they've happened without fully and fairly investigating the claim. Browning didn't try to speak with Brennon because she was still in intensive care and "it seemed crass to call her for a statement." Fair enough, but shouldn't the fact that Brennon was in intensive care have made him doubt that she was in a position to call the coroner's office to try to claim Santiago's body? That it apparently didn't is powerful evidence of how strongly inclined he was to believe what he was hearing without fully corroborating the charge. Yes, Indiana is full of homophobes in high places and lacks the most basic protections for LGBT citizens and relationships, but that doesn't justify jumping to conclusions and circulating falsehoods about particular offices or officeholders. Such mistakes don't serve the cause of advancing LGBT rights, as Browning knows. They also don't honor the memory of Christina Santiago or comfort her grieving partner, family, and friends.

Attention, please: This brief rant has been brought to you by Moose, who feels bad for circulating Savage's post about the Marion County coroner's office on her Facebook page without independently checking out the story. You heard it here first, folks: Not everything you read on the interwebs is true. Be skeptical. Be fair. Be thorough.

RIP Christina Santiago. Your memory will endure, and your vital work will go on. Our condolences to those who loved you and healing thoughts to Alisha Brennon for a full and swift recovery.

Peace out.
Posted by Roxie Smith Lindemann at 11:44 PM